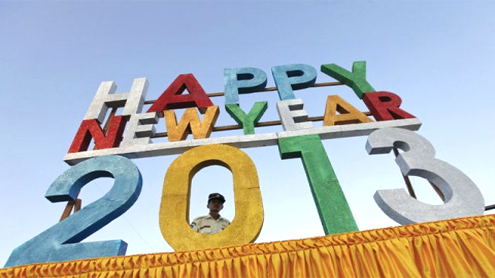 SYDNEY: Spectacular fireworks exploded over Sydney in a blaze of light and colour Tuesday to ring in the New Year, as the city kicked off a wave of global celebrations from Dubai to London to welcome 2013.

Australia’s famous harbour city brought in the New Year on a balmy summer night with a US$6.9 million display curated by pop icon Kylie Minogue, who pressed the button to start the pyrotechnics. To the roars of the crowds, the sky erupted in light at midnight as fireworks shot up from barges and jet skis in the harbour and cascaded from the Harbour Bridge and burst and glimmered overhead.

“This is really putting Australia on the map in terms of welcoming people to the New Year,” Sydney Lord Mayor Clover Moore said. Officials were expecting up to 1.5 million people to gather in the city and crowds jammed all vantage points along the waterfront to watch the seven tonnes of fireworks ignite the sky. “We just wanted to see the fireworks,” said 19-year-old Silvia Hondt, from Germany, as she walked with friends along the foreshore at Circular Quay.

“I think the Sydney fireworks are really popular all over the world – everyone knows them from the television.”Fireworks will also light up the Thames in London, Moscow’s Red Square and Kremlin and Hong Kong’s Victoria Harbour, as well as central Kuala Lumpur, Taipei, Stockholm, Amsterdam and cities across China.Revellers in New York will celebrate the stroke of midnight with the traditional New Year’s Eve ball drop over Times Square, where South Korean Internet and pop sensation Psy will join a host of American music stars.

In Rio de Janeiro, officials have promised a bumper 16-minute, 24-tonne display opposite Copacabana Beach while in Germany, fireworks will cap a party at Berlin’s Brandenburg Gate with the Pet Shop Boys, Bonnie Tyler and Blue.Vying to become a permanent fixture on the planetary map of New Year celebrations, the Gulf city state of Dubai is planning a lavish gala at the Burj Khalifa, the world’s tallest building.

Fireworks will engulf the spike-like tower, accompanied by a soundtrack performed live by the Prague Philharmonic Orchestra. Some 50,000 people are also expected to flock to the revered golden Shwedagon Pagoda in Yangon for the Myanmar city’s first public countdown with fireworks, seen as further evidence of opening up after decades of junta rule.In Paris, however, the authorities issued a reminder that all fireworks are officially banned for the night. The crowds that gather on the Champs-Elysees and around the Eiffel Tower will have to make do without any display.

And in Caracas, the mayor cancelled the city’s traditional end-of-year concert in Bolivar Square, instead asking Venezuelans to pray at home for ailing President Hugo Chavez, who suffered a new setback after cancer surgery.In regions devastated by Typhoon Bopha which hit the southern Philippines in early December killing at least 1,067 people, many survivors said food, work and permanent shelter topped their priorities for the New Year.

Authorities in the capital Manila are bracing for the annual rush of injuries as families celebrate with do-it-yourself firework displays and shoot celebratory bullets into the air.Seoul will usher in 2013 with a ritual ringing of the city’s 15th-century bronze bell 33 times, reflecting the ancient practice of marking a new year.Elsewhere in the South Korean capital, including the glitzy Gangnam district made famous in the hit that saw Psy become a household name, there will be fireworks, concerts and street parties. – Nation