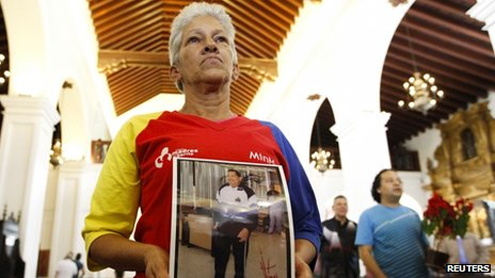 Venezuelan cabinet ministers got together to pray for the recovery of President Hugo Chavez, who is in Cuba recovering from a cancer operation.

They took part in a mass held at the presidential palace in Caracas.Official New Year celebrations were called off on Sunday after Vice-President Nicolas Maduro announced that Mr Chavez had suffered new complications.The 58-year-old president is due to be sworn in for a new term on 10 January.”The government is united, we are all praying for his health to recover so he can return to our country,” said Federal District governor Jacqueline Farias.

Elsewhere in the Venezuelan capital, at the San Francis church, some 300 people attended another mass for Mr Chavez.Mr Chavez, who has been in power since 1999, was elected in October for a fourth term in office.Earlier this year, he said he had been cleared of a cancer diagnosed in 2011 and was fit to serve out his six-year term.But on 11 December, he went through his fourth cancer operation in Cuba.The BBC’s Sarah Rainsford in Havana says it is now three weeks since Hugo Chavez has been seen or heard from in person.

There are also many questions about what will happen on 10 January when Mr Chavez is due to be re-inaugurated, our correspondent adds.National Assembly head Diosdado Cabello recently said that the swearing-in ceremony would be delayed in the case of Mr Chavez’s absence.But the opposition says such move would be unconstitutional.

The Venezuelan constitutions states that a new election should be called in 30 days should the president not be fit enough to attend his inauguration, the opposition argues.Vice-president Nicolas Maduro went to Cuba on Saturday to meet Mr Chavez.In a televised announcement from Havana on Sunday, he said that the president had “suffered new complications” and that his health state remained “delicate”.

“We have been informed of new complications that arose as a consequence of the respiratory infection we already knew about,” he said.He added that the treatment was “not without risk.”Following Mr Maduro’s announcement, Information Minister Ernesto Villegas appeared in a special programme on Venezuelan TV, calling on Venezuelans not to believe rumours about the president’s health.Late on Sunday, Mr Villegas said a government-organised New Year’s Eve concert in central Caracas had been cancelled and he urged Venezuelans to pray for President Chavez. – BBC