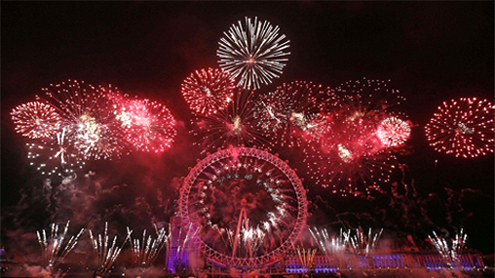 About 250,000 people lined the banks of the Thames to witness the incredible display of pyrotechnics and lights.Up and down the country, millions of people packed into towns and cities to celebrate 2013 following the astonishing success of 2012.The spectacle in London saw a quarter-of-a-million people gather on the banks of the Thames to watch the 11-minute firework show which followed the traditional counting down of the final seconds by Big Ben.

Clips from the 2012 Olympic Games featured in the fireworks display over the London Eye.Mayor of London Boris Johnson said: “What an amazing end to an incredible year.’Watched by hundreds of thousands in the capital and millions around the globe, London has proved, yet again, that it can pull off spectacular world-class events in style.’Many of them waited for hours to secure the best viewpoints on the banks of the Thames, but fortunately it was a dry and mild night.Rob Haine, 30, a computer game programmer from Wakefield, said: ‘The display was mesmerising, it was a joy to witness.

‘I had high expectations but they were completely surpassed.’I got here at 5pm and have been standing the whole time but it was worth it. It was cool that they got the Olympics into the fireworks.’Sandro Benvenuti, 46, travelled from Italy with his wife and two daughters to see the display.’We were waiting for six hours but it was fantastic,” he said.’We have fireworks in Italy but those were much better. They went on for longer and the design and special effects were superior.’

Lynn Shepherd, 53, from the village of North Newbald, East Yorkshire, praised the ‘electric atmosphere’.She said: ‘There’s no trouble here. Everyone is having a good time and it’s the perfect way to finish 2012.’People cheered as the capital’s famous landmarks were bathed in the light of the display, which included streamers shot out of the London Eye and blazing rockets launched from the banks of the River Thames.here were impromptu fireworks displays throughout much of London as the city remembered a year that saw the success of London 2012, the Queen’s diamond jubilee and the announcement that the Duke and Duchess of Cambridge are expecting their first child.

London Ambulance Service said it had been a busy night, with control room staff answering 2,603 emergency calls between midnight and 5am.Treatment centres were set up in central London to attend to increased demand from people with ‘alcohol-related injuries’.Paramedics treated 506 patients at the centres and took a further 49 to hospital.Assistant chief ambulance officer John Pooley, who led the New Year’s Eve operation, said: ‘Demand on the service in the early hours was extremely high and a lot of the extra calls were because of alcohol-related injuries.

‘At the busiest point of the night, our staff were taking 635 emergency calls an hour.’They would expect to deal with 180 calls an hour on a normal night.’Thousands of revellers partied on the streets of Edinburgh – dubbed the home of Hogmanay –  to welcome the new year.Around 75,000 partygoers counted down the last 10 seconds of 2012 before joining in a mass rendition of Auld Lang Syne after the clock struck midnight in Edinburgh.The world-famous event saw Scottish rock band Simple Minds headline the Concert in the Gardens, following performances from The View and Bwani Junction.They were among 14 acts performing across five stages, including Mercury Prize nominees The Maccabees and Reverend and the Makers.

Countdown fireworks at 9pm, 10pm and 11pm set the sky alight, with the five-minute midnight display from the ramparts of Edinburgh Castle set to music for the first time.The tracks played were from bands who have performed at the street party in the past as more than 2,000 firework cues were used, triggering over 17,000 shots from 45 locations.Partygoers from across the world visited the city to join in the events, which also included a ceilidh with 3,000 people dancing as the bells chimed.Tickets for the celebrations were bought by those in more than 60 countries, including Australia, Brazil, Japan, Turkey and the US.Pete Irvine, artistic director of Edinburgh’s Hogmanay, said: ‘I think it’s going really well this year.

‘Last night we had our opening event with a record crowd at the torchlight procession.’It’s really, really busy here tonight – probably busier than we’ve seen it in some time because the weather is so good.’There’s a moon in the sky, it’s actually not cold and it’s not raining.’We’ve been very lucky with the weather and I think we are going to be very lucky with the crowd and all the performances tonight on many stages.’Early celebrations got under way in the city dubbed the home of Hogmanay last night with a torchlight parade.

A record crowd estimated at 35,000, including 7,000 torch carriers, were led by the massed pipes and drums and the Up Helly Aa’ Vikings from Shetland. The procession made its way through the city streets to the burning of the effigy of a Viking boat and a spectacular Son et Lumiere display on Calton Hill.Events will also take place on New Year’s Day, including sled dog races at Holyrood Park and a triathlon which will see competitors swim 400 metres of the Royal Commonwealth Pool, cycle 11 miles around Arthur’s Seat and then run 3.5 miles.The Loony Dook, the annual dip in the River Forth at South Queensferry, will also take place.

It was a busy night for the emergency services, with some reporting a huge spike in the number of calls they received.The Metropolitan Police said as of 3.45am, officers made 96 arrests across the capital relating to the New Year’s Eve celebrations, mainly for being drunk, public order offences and assault.More than 3,500 police supported the organisers and stewards of the event in central London, working alongside colleagues from the British Transport Police and other emergency services to keep revellers safe.

Chief Inspector John Williams said: “This year has really been one to remember and what better way to top off the success of team GB at the Olympics and Paralympics and the pageantry of the Queens Diamond Jubilee than with a world-class firework display.’This year saw the viewing areas fill up earlier than ever before with thousands of revellers coming to see in the new year London-style.’Officers worked hard, alongside the stewards, in very large crowds to keep people safe in what is a challenging policing environment, helping to ensure revellers and visitors alike could make their way home at the end of the night.

‘There were no major issues reported to police and the crowds were good natured.’Officers continue to work through the night to facilitate the clean-up operation, ensure roads are reopened and the area returns to normality in time for the New Year’s Day parade.’South East Coast Ambulance Service (Secamb), which handles 999 calls from Kent, Sussex and Surrey, took 1,544 calls between 10pm yesterday and 4am this morning – a rise of more than 20 per cent on the same period last year.Yesterday, Secamb officials urged people to use the service wisely and only call when absolutely necessary.Last year a large number of calls were due to people falling over, suffering breathing difficulties or being injured in fights. – DailyMail