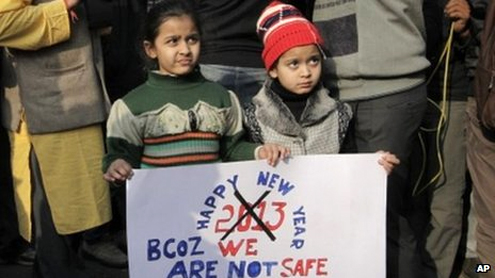 India has scaled back New Year celebrations, as it mourned the death of a woman whose gang rape on a bus a fortnight ago sparked public outrage.

The army has cancelled all official celebrations as have the states of Punjab and Haryana.The president of the governing Congress party, Sonia Gandhi, also said she would not be celebrating.Meanwhile, protests continued on Monday in the capital, Delhi, where the 23-year-old medical student was assaulted.The victim died on Saturday morning in a Singapore hospital where she was being treated for severe injuries. She was cremated in Delhi on Sunday.The attack sparked huge protests expressing anger over attitudes to women in India and calling for changes to the laws on violence against women.

As vigils continue to be held, hotels, clubs and business houses and celebrities announced they would be cancelling or toning down planned events for New Year’s Eve.Six men arrested for the 16 December rape have been charged with murder. If convicted, they could face the death penalty, which is rarely carried out in India.The victim’s family have said they would fight to ensure the death penalty is handed down to anybody convicted.”The fight has just begun. We want all the accused hanged, and we will fight for that, till the end,” her brother told The Indian Express newspaper.

Speaking to the newspaper, the woman’s father added that his family has been consumed by grief.”It is too painful. I have not gone inside her room. She was born in this house. Her books, clothes they are all here.”It is hard to believe I will never hear her voice again,” he said.The viciousness of the assault on the young woman has left most Indians stunned and many say they are in no mood to celebrate.

The Indian army spokesman Veerendra Singh told the BBC that all its formations across the country were advised to cancel official celebrations.Mrs Gandhi has also appealed to her party colleagues and well-wishers not “to extend New Year greetings in the wake of gang-rape incident”. “Let there be no New Year celebrations across the country. It will be a major tribute to the departed soul,” The Hindustan Times newspaper quoted Praveen Khandelwal, secretary-general of the Confederation of All India Traders, as saying.

Protesters say they will continue with their action until the authorities accept their demand for tougher laws to protect women in the country.Meanwhile, the city authorities’ plan to launch a new telephone helpline for women in distress has been delayed due to a “technical glitch”, officials said.The 24-hour helpline number 181 will operate out of Delhi Chief Minister Sheila Dikshit’s office and will be connected with all the 185 police stations across the city.
Marriage plans

The woman – a medical student whose identity has not been released – and her friend had been to see a film when they boarded the bus in the Munirka area of Delhi, intending to travel to Dwarka in the south-west of the city.Friends told the AFP news agency the couple were in a relationship and had been planning to marry in the next few weeks.The Indian government was heavily criticised for its response to the attack, which many called “slow” and inadequate.According to official figures, a woman is raped in Delhi every 14 hours, while women across the country say they are frequently subjected to sexual intimidation and violence.

Officials have since announced a series of measures intended to make the city safer for women.These include more police night patrols, checks on bus drivers and their assistants, and the banning of buses with tinted windows or curtains.But many of the protesters say that women are viewed as second-class citizens, and that a fundamental change in culture and attitudes, backed up by law, is needed to protect them. – BBC