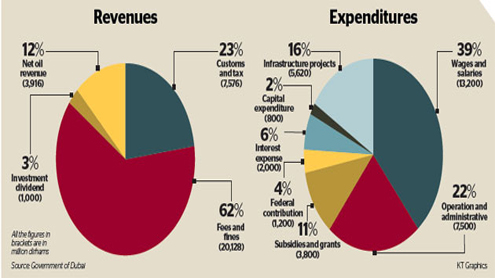 Dubai’s government has announced its budget for 2013 with more than Dh34.12 billion expenditures and nearly eight per cent increase in public revenue.

His Highness Shaikh Mohammed bin Rashid Al Maktoum, Vice-President and Prime Minister of the UAE and Ruler of Dubai, on Monday approved Dubai’s fiscal budget for the year 2013.The government is able to reduce the budget deficit to record levels keeping the deficit ratio at less than 0.5 per cent of the GDP, the government said in a statement.The gap in the budget has been reduced by 18 per cent from 2012, where public revenues have been set at Dh32.62 billion.

The Department of Finance director general Abdul Rahman Saleh Al Saleh said there was a possibility of balancing the 2013 budget but it was the government’s preference to expand its expenditures in a bid to support the emirate’s economy by increasing public spending for the fiscal year 2013 by six per cent over the 2012 budget.The government said the focus of the budget was on a prudent fiscal policy that provides the stimuli necessary to economic growth.

Net oil revenues witnessed an increase of 11.8 per cent in the fiscal year 2013 owing to higher oil prices. The rise in fees revenue is due to real economic growth and reflects the expected growth rates in the emirate.Allocations to budget from government investment returns were reduced to allow for increased reinvestment in the Emirate’s economic growth.Spending on infrastructure will fall slightly to 16 per cent of total expenditure because of the completion of a number of large projects, the statement said, adding: “The government remains committed to its announced infrastructure projects which participate in economic growth and stimulate domestic and foreign investments.”

The government has also indicated that it is committed to not using oil revenues to fund infrastructure projects.The distribution of expenditures by key sectors emphasises this government’s commitment to the individual. This is reflected in 26 per cent of government spending being allocated to social development in the areas of healthcare, education, housing and community development.