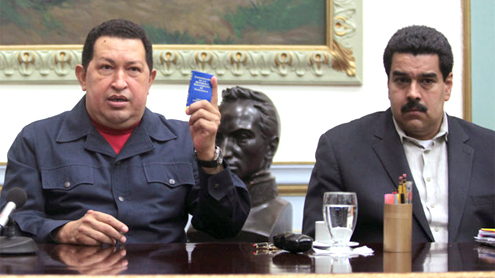 Vice President Nicolas Maduro spoke with a solemn expression in a televised address from Havana, saying he had spoken with Chavez and that the president sent greetings to his homeland. Maduro did not give details about the complications, which he said came amid a respiratory infection.”Several minutes ago we were with President Chavez. We greeted each other and he himself referred to these complications,” Maduro said, reading from a prepared statement. The vice president was seated alongside Chavez’s eldest daughter, Rosa, and son-in-law Jorge Arreaza, as well as Attorney General Cilia Flores.

Maduro’s comments suggest an increasingly difficult fight for the ailing president. The Venezuelan leader has not been seen or heard from since undergoing his fourth cancer-related surgery Dec. 11, and government officials have said he might not return in time for his scheduled Jan. 10 inauguration for a new six-year term.”The president gave us precise instructions so that, after finishing the visit, we would tell the (Venezuelan) people about his current health condition,” Maduro said. “President Chavez’s state of health continues to be delicate, with complications that are being attended to, in a process not without risks.”Maduro held up a copy of a newspaper confirming that his message was recorded on Sunday.

“Thanks to his physical and spiritual strength, Comandante Chavez is facing this difficult situation,” Maduro said.Maduro said he had met various times with Chavez’s medical team and relatives. He said he would remain in Havana “for the coming hours” but didn’t specify how long.Maduro, who arrived in Havana on Saturday for a sudden and unexpected trip, is the highest-ranking Venezuelan official to see Chavez since the surgery in Cuba, where the president’s mentor Fidel Castro has reportedly made regular visits to check on him.

Before flying to Cuba, Maduro said that Energy Minister Hector Navarro would be in charge of government affairs in the meantime.”The situation does not look good. The fact that Maduro himself would go to Cuba, leaving Hector Navarro in charge only seems understandable if Chavez’s health is precarious,” said David Smilde, a University of Georgia sociologist and analyst for the Washington Office on Latin America think tank.

Smilde said that Maduro probably made the trip “to be able to talk to Chavez himself and perhaps to talk to the Castros and other Cuban advisers about how to navigate the possibility of Chavez not being able to be sworn in on Jan. 10.””Mentioning twice in his nationally televised speech that Chavez has suffered new complications only reinforces the appearance that the situation is serious,” Smilde said.

Before his operation, Chavez acknowledged he faced risks and designated Maduro as his successor, telling supporters they should vote for the vice president if a new presidential election were necessary.Chavez said at the time that his cancer had come back despite previous surgeries, chemotherapy and radiation treatment. He has been fighting an undisclosed type of pelvic cancer since June 2011.

Medical experts say that it’s common for patients who have undergone major surgeries to suffer respiratory infections and that how a patient fares can vary widely from a quick recovery in a couple of days to a fight for life on a respirator.Maduro’s latest update differed markedly from last Monday, when he had said he received a phone call from the president and that Chavez was up and walking.

The vice president spoke on Sunday below a picture of 19th century independence hero Simon Bolivar, the inspiration of Chavez’s leftist Bolivarian Revolution movement.Maduro expressed faith that Chavez’s “immense will to live and the care of the best medical specialists will help our president successfully fight this new battle.” He concluded his message saying: “Long live Chavez.”Chavez has been in office since 1999 and was re-elected in October, three months after he had announced that his latest tests showed he was cancer-free.

Opposition politicians have criticized a lack of detailed information about Chavez’s condition, and last week repeated their demands for a full medical report.Information Minister Ernesto Villegas defended the government’s handling of the situation, saying during a televised panel discussion on Sunday night that Chavez “has told the truth in his worst moments” throughout his presidency.Villegas said a government-organized New Year’s Eve concert in a downtown Caracas plaza had been canceled, and he urged Venezuelans to pray for Chavez.

Chavez’s daughter Maria, who has been with the president since his surgery, said in a message on her Twitter account: “Thank you people of Venezuela. Thank you people of the world. You and your love have always been our greatest strength! God is with us! We love you!”Allies of the president also responded on Twitter, repeating the phrase: “Chavez lives and will triumph.” – YahooNews