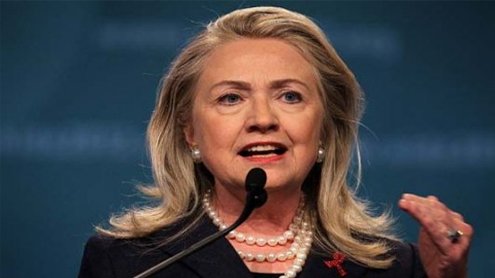 Secretary of State Hillary Rodham Clinton has been admitted to a New York hospital for treatment of a blood clot, her spokesman said Sunday.

State Department Spokesman Philippe Reines said Clinton had entered the hospital following a medical examination for a concussion she sustained earlier this month.”In the course of a follow-up exam today, Secretary Clinton’s doctors discovered a blood clot had formed, stemming from the concussion she sustained several weeks ago,” Reines said in a statement.  “She is being treated with anti-coagulants and is at NewYork-Presbyterian Hospital so that they can monitor the medication over the next 48 hours.”

Reines added, “Her doctors will continue to assess her condition, including other issues associated with her concussion. They will determine if any further action is required.”Clinton was scheduled to return to work this week after treatment for the concussion. She is set to step down from her post shortly after President Barack Obama’s inauguration on January 21. Last week, Obama announced he had chosen Massachusetts Sen. John Kerry to replace Clinton as the nation’s top diplomat. – Yahoonews