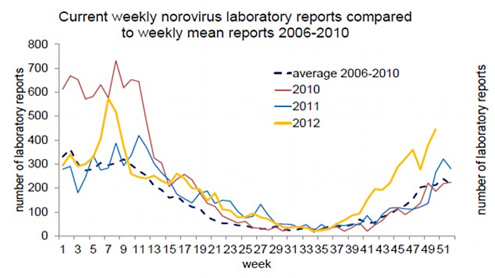 The winter vomiting bug has claimed another 141,000  victims in the last week, pushing the annual total up to more than 1.1million.

Health officials said the number of confirmed cases of norovirus was more than double the level for this time last year – and the toll is expected to rise again.Latest figures from the Health Protection Agency show there were 3,538 confirmed cases before the 492 new ones from last week.The total of 4,030 is more than twice the 1,934 cases at this time last year. But this is only a fraction of the true total as most sufferers do not visit their GP.

HPA officials estimate there are 288 victims in the community  for every confirmed case. This suggests that approximately 1.15million adults and children have been hit by the virus.But this is likely to be only a fraction of the true.The agency said that in the two weeks to December 23 there were also 70 reported hospital outbreaks, compared with 61 in the previous fortnight.That brought the number of outbreaks for the season to 538, forcing many wards to close to prevent the illness spreading.

The number of cases has  risen earlier than expected this year, following a trend seen  across Europe and other parts of the world which has  unknown causes.In Australia, outbreaks began earlier than usual during the  winter and have persisted into their summer. John Harris, an HPA norovirus expert, said: ‘The number of laboratory-confirmed cases has risen once again as it appears that we have seen the rise that usually begins in January start a little earlier than we expect.

‘Norovirus is very contagious and very unpleasant. To help prevent spread, it’s important that people who believe they are unwell maintain good hand hygiene and stay away from hospitals, schools and care homes, as these closed environments are prone to outbreaks which can cause severe disruption.’Symptoms include a sudden onset of vomiting and diarrhoea, often with headache, raised temperature and stomach cramps.The illness usually resolves itself in one or two days in otherwise healthy people. – DailyMail