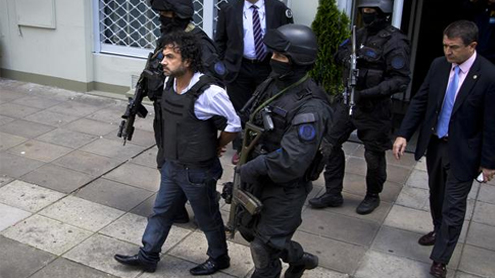 Prosecutors in the United States have requested the extradition of one of Colombia’s most wanted drug dealers, detained two months ago in Argentina.

Henry de Jesus Lopez Londono, known as  or My Blood, is the alleged leader of the Urabenos gang, which operates in northern Colombia.Argentine media reported that he was due to be released on 2 January unless there was a formal extradition request.Lopez entered Argentina with a false passport, police said.The 41-year-old Colombian posed as a Venezuelan businessman, travelling for work.

He was arrested with his wife and 10 bodyguards in Buenos Aires on 30 October.Henry Lopez insists that he has been the victim of “a complot”.He was officially notified of the request made by a court in southern Florida, official Argentine news agency Telam said.The extradition process is expected to last four months.

Officers from the United States Drug Enforcement Administration, the Colombian police and the Argentine police force had been tracking him for months prior to his arrest, tapping his phone, monitoring his cars via satellite and infiltrating his inner circle.They said he, his wife, two children and bodyguards had constantly moved between five different residences.

According to police, Mi Sangre had arrived in Argentina two years earlier, but had travelled between Venezuela, Uruguay, Ecuador, Mexico and Paraguay arranging drug deals.They said that only minutes before his arrest he had met a member of the Mexican drug cartel Los Zetas, for whom he provided much of the drugs. – BBC