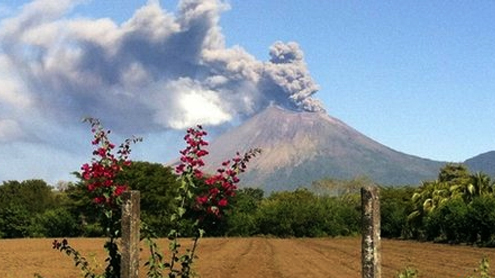 The authorities in Nicaragua have ordered the evacuation of about 400 people living near San Cristobal volcano after it began spewing out hot gases and ash on Tuesday.

The authorities also declared an amber alert covering 5 sq km around the volcano, warning of a possible risk.Airlines were also told to avoid flying over western Nicaragua.First Lady and government spokeswoman Rosario Murillo said 15 eruptions were recorded since Tuesday night.

The eruptions were small, but Ms Murillo said it was impossible to know for certain whether there would be larger ones that could put the population at risk.The hot gases spewed by the San Cristobal volcano reached an altitude of 2,500 m.Its ashes could reach 11 communities living in the vicinity.

The Nicaraguan army has sent rescue teams to the area.San Cristobal, Nicaragua’s highest volcano, is located about 135 km northwest of Managua.It is considered the country’s most active. It last erupted in September, killing some farm animals. – BBC