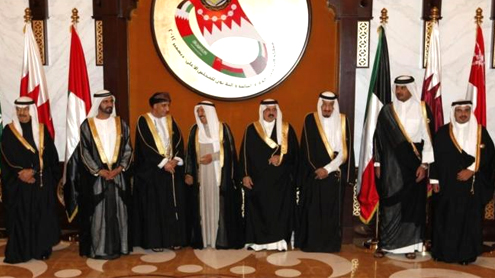 JEDDAH: GCC leaders lashed out at Iran as they concluded a two-day summit in Manama yesterday saying Tehran must immediately and completely stop its “interference” in their internal affairs.

The six-member Gulf Cooperation Council also decided to set up a joint defense system and remove obstacles facing economic integration. They also called for a rapid political transition in Syria to end the crisis.GCC Secretary-General Abdullatif Al-Zayani said the summit leaders reiterated their support for the Gulf Union proposal to strengthen the organization in the backdrop of growing regional threats.“The summit has agreed to establish a joint military command for member countries’ naval, air and ground forces.

They have also endorsed the GCC security pact,” Al-Zayani said.Referring to the joint defense system, the leaders affirmed their commitment to “The principle of joint collective security through the development of military capabilities and self-development of each of the GCC states and the commitment to promote the development of the Common Defense System to defend the achievements of the states.”Al-Zayani said the GCC “rejects and denounces” Iran’s “continued interference” in their internal affairs and Tehran must “immediately and completely stop these actions and policies that increase regional tension and threaten security and stability”.

The six states, Saudi Arabia, Qatar, Bahrain, Kuwait, Oman and the UAE, also condemned Iran’s “continued occupation of the three UAE islands — Abu Musa, Greater Tunb and Lesser Tunb — that lie in the strategic Strait of Hormuz entrance to the Gulf.“Any acts or practices implemented by Iran on the three islands will be deemed null and void and should not entail any change in legal or historic status of the islands which confirm the right of supremacy of the UAE over its three islands,” the GCC chief said. The GCC also took the opportunity to urge Tehran to cooperate with the UN atomic agency over its controversial nuclear program and to ensure the safety of its Bushehr atomic power plant on the Gulf to avoid any nuclear accident.

Bahraini Foreign Minister Khalid bin Ahmed Al-Khalifa told reporters that Iran posed a “very serious threat” to the region.“Politically, there is a lot of meddling in the affairs of GCC states, an environmental threat to our region from the technology used inside nuclear facilities and there is, of course, the looming nuclear program,” he said, referring to Iran’s disputed atomic work.“So the threat level is quite high, but we are ready if faced with circumstances that require action,” he added.

Referring to the worsening situation in Syria, the summit leaders expressed “deep sadness over the continued shedding of blood by the regime and the destruction of cities and infrastructure, making political transition a demand, which must be rapidly implemented.”They also urged the international community “to make a quick and serious move to end massacres” in Syria and provide humanitarian assistance to the people.The six states voiced their support to the international peace envoy Lakhdar Brahimi’s mission in Syria, hoping it “will help achieve agreement within the Security Council.”

The GCC states affirmed their support to the newly-formed opposition National Coalition “as the legitimate representative of the Syrian people.” More than 44,000 people have been killed since the eruption in March 2011 of the uprising against the Syrian regime.Meanwhile, informed sources told Al-Arabiya channel that the Gulf Union, proposed by Custodian of the Two Holy Mosques King Abdullah during the last summit in Riyadh, would not be in the form of a federation or confederation.

Addressing the summit, on behalf of King Abdullah, Crown Prince Salman said the Kingdom was looking forward to a strong and solid union. “We are looking forward to a strong union that meets the hopes and aspirations of GCC citizens by completing economic union, creating economic and social environment to boost welfare, and adopting a unified and effective foreign policy to protect member states from regional and global conflicts,” he said.

The summit called for closer economic integration and unity in the face of the turmoil, which has swept much of the Middle East.King Hamad of host country Bahrain called for the GCC to provide “a security umbrella for its peoples” and urged an “economic complementarity.”Sheikh Sabah Al-Ahmad Al-Sabah of Kuwait called for humanitarian aid for Syrian civilians and urged Iran to reach a peaceful settlement with neighbors, including over three Gulf islands in dispute with the UAE. He announced a donor conference for civilians caught up in the Syrian conflict to be held at the end of January at the request of the United Nations.

The sources said the Peninsula Shield Force, based in Saudi Arabia, would remain with an independent command and would not be merged with the new defense system.It was also announced that GCC countries and other donors have agreed to give $ 8 billion for the reconstruction of Yemen. The GCC will also help Yemen to strengthen its security.Meanwhile, the Sakhir Declaration issued at the end of the summit emphasized the importance of GCC transforming into a single entity in response to the aspirations of the GCC citizens and meet the challenges they face. It stressed that an attack on any GCC state would be considered as an attack on them all, and that any threat on one of them would be considered as a threat on all member states.

The summit leaders affirmed their commitment to implementing all the decisions for GCC’s integration in all areas, and their compliance with the timetable for the establishment of the Gulf common market, adding that they would work to remove impediments to the application of the GCC Customs Union.The declaration also noted the steps that have been taken to implement the decision of the Supreme Council on the timetable for achieving the common Gulf market and joint developments with regard to the areas stipulated in Article III of the Economic Agreement, especially in the areas of movement and residence for GCC nationals, the practice of trades and professions, movement of capital, tax measures, equality of treatment between nationals of the GCC in receiving education, health, social services, employment in government and private sectors, and social insurance and retirement.

The summit stressed the need to promote the spirit of citizenship among GCC nationals through familiarization with the council’s activities, achieving full Gulf citizenship to strengthen the social and family fabric and ties of kinship and cohesion, facilitating economic activity for GCC citizens, and intensifying communication between the Shoura and National Councils in member states.The summit welcomed the opening of the Vienna-based King Abdullah Center for Interreligious and Intercultural Dialogue to promote a culture of dialogue and fight extremism. The leaders condemned the outrageous terrorist bombings that occurred recently in the city of Manama, Bahrain that killed a number of innocent people, stressing full solidarity with Bahrain in its efforts to maintain its national unity and consolidate security and stability.

The Supreme Council welcomed the opening of the International Excellence Center for Curbing Violent Extremism (Hidayah) in Abu Dhabi where experts and expertise are pooled from various countries in order to combat extremism.The summit affirmed the right of countries, including Iran, to harness peaceful nuclear energy on the condition that the operating country adopt responsibility for the safety of its nuclear facility whilst taking into consideration environmental safety in the large geographic region and the need to fully comply with standards of safety and security and non-nuclear proliferation.