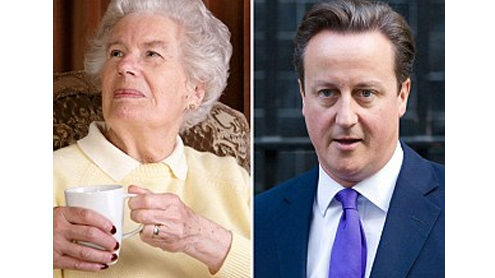 Middle-class couples who need residential care in old age could be hit with bills as high as £150,000.

Under Coalition plans to be unveiled in the New Year, the upper limit on the amount that must be contributed towards care could be £60,000 or even £75,000 per person.This ‘cap’ is much higher than the £35,000 suggested by last year’s independent review into England’s care funding system.If both husband and wife end up moving into residential care, it could mean they will have to pay out up to £150,000 before the state steps in.

In addition, they will still have to meet accommodation costs – the ‘bed and board’ charge for care home stays. This could push the total outlay to almost £200,000.Critics say setting the cap so high will do little to stop thousands of pensioners having to sell their homes each year, denying their children an inheritance.And they are likely to accuse David Cameron of letting the elderly down, as Downing Street has previously attracted positive coverage by backing the review’s proposal of a £35,000 cap.

At present, care home residents can be landed with unlimited charges if they have assets, including their house, of more than £23,500. Those who have no savings get care completely free.Ministers have pledged to increase this threshold to £100,000, meaning people will no longer see their savings depleted to below this level.But the benefit could be wiped out by the imposition of a cap that is more than double the amount that was originally expected.In addition, it is understood that the new system may not even be put in place until as late as 2017, despite promises to sort the issue out before the next General Election, due in 2015.

At least 20,000 elderly people have to sell their homes every year to pay unlimited care costs.Last year, a Government-commissioned report by economist Andrew Dilnot concluded that a lifetime cap should be imposed of between £35,000 and £50,000, with the state stepping in to pay the rest.At that time, a senior Conservative source told the Daily Mail: ‘The Prime Minister said “We’ve got to do Dilnot. We’re going to do this”.’

Mr Cameron said: ‘I hope to be able to announce the way forward by the next election but we’ve got to find the money first. It seems to me absolutely vital.’ He added that he was confident the funding would be found.But Chancellor George Osborne balked at the estimated £1.7billion a year cost at a time when he is trying to bring down Britain’s deficit.To bring down the cost, it seems ministers are considering a higher cap of £60,000 or perhaps even £75,000, meaning the state will not be called upon to pay as much.

The cap would be for individuals, meaning that couples could be asked to pay £150,000. In addition, the cap only covers the cost of nursing and personal care, such as help with washing and dressing.It does not include the ‘bed and board’ cost of food and heating, which add up to between £7,000 and £10,000  a year.Residents would have to pay this on top of their care fees, potentially pushing the total cost towards the £200,000 level.

Whitehall sources said that no final decision had been taken on the level of the cap, but that ‘the higher end of what has been speculated is most likely’.Professor Dilnot also suggested that the assets threshold of £23,500, below which people have to pay nothing towards their residential care, should be raised substantially to £100,000.It is likely that ministers will respect this part of his recommendations.

Last night Ros Altmann, director general of the over-50s group Saga, said such a high cap would be a ‘betrayal’ of pensioners.‘A £75,000 cap is too high and would still mean most middle-class families, especially outside London, would lose their home and life savings because the cap excludes accommodation costs which will be many thousands more,’ she said.‘This high a cap would not allow an insurance market to develop and is more than double the £35,000 recommended by Dilnot.’

The social care plan is one of the key parts of a Coalition ‘mid-term review’, which will also involve a commitment to introduce a single-tier state pension of about £140 a week.The review will include measures to cut the cost of childcare, and is expected to commit ministers to new ways to fund the motorway and trunk road network, such as by handing construction and maintenance to the private sector.

A Department of Health Spokesperson said: ‘We want this country to be one of the best places in Europe to grow old and that is why in July we announced the most extensive reforms of care and support in over 60 years.’As part of the reforms, we committed to taking action to ensure people do not have to sell their homes to pay for care.’We also agreed that the Dilnot Commission’s model of the cap on care costs is the right basis for any new funding model, but given the current economic situation, we need to look carefully at how we can pay for this. – Dailymail