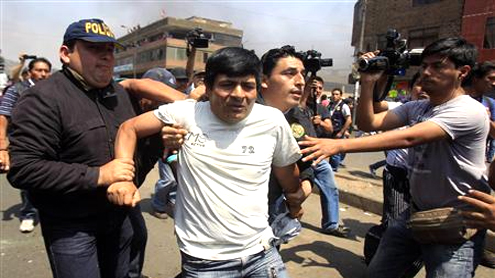 Attackers opened fire as police responded to reports of a traffic accident in a rural area of Michoacan state, killing four officers.Three officers and a civilian were killed in another attack in the neighbouring state of Jalisco.It was not clear who was behind the killings but the region has been plagued by drug-related violence.

The Knights Templar and New Generation drug cartels vie for control of the illegal drugs trade in Michoacan.The first attack happened in Brisenas, a small town on the border with Jalisco, where earlier this month the police chief and three other officials were kidnapped by unidentified attackers and are still missing.

According to officials, gunmen ambushed officers on Sunday as they drove to a reported road accident. Four officers were killed and five others injured.A short while later, attackers opened fire on police in Ayotlan in Jalisco state, killing three officers and a civilian.Some 60,000 people have died across Mexico since 2006 when the previous government under Felipe Calderon deployed the military against the drugs gangs.

Earlier this month, President Enrique Pena Nieto announced the creation of a new national force as part of continuing efforts to tackle crime and violence.Mr Pena Nieto, who took office on 1 December, said the new militarised force would initially be 10,000 strong. – BBC