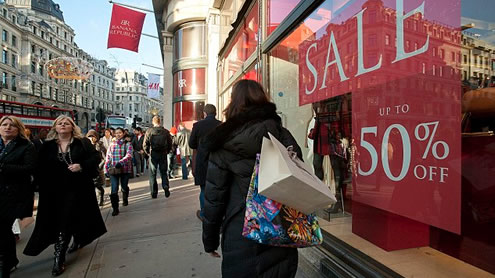 Britain’s biggest internet retailers have brought their sales forward to Christmas Eve – and millions of us are expected to carry on shopping online through Christmas Day.

Stores worried by poor sales figures at the start of December will begin promoting bargains from noon today – confirming there will be no pause in the frenzy of commerce and consumerism for Christmas. Sales traditionally start on Boxing Day but retailers are now using every trick in the book to steal a march on their rivals, both in the High Street and on the web. The Marks & Spencer online sale begins at noon today, while John Lewis starts at 5pm and Currys/PC World at 7pm. Amazon has already brought forward its sale by one day to start on Christmas morning. Internet retailers predict that virtual shopping will go on throughout Christmas Day with a record 82million website visits – up 32 per cent on last year. At the same time spending, including on retail sites and eBay, is predicted to hit a new high of £307million.

But the trend for logging on to go bargain hunting on Christmas Day has alarmed church leaders. Former Archbishop of Canterbury Lord Carey said: ‘Christmas Day is a time to be together with the family, to focus on the children and to have a great time together. ‘This day is precious. We are now in danger of the gadgets taking over our lives and we are not in control of them.’ Today will also be busier than normal in the High Street as shoppers make a last-ditch dash to buy the fresh food and gifts. Many were unable to complete their shopping yesterday because of the six-hour cap on opening hours caused by the Sunday trading restrictions. The shorter opening hours on what is normally a very busy day for supermarkets caused long queues and frayed tempers at the tills. M&S opened more than 60 of its outlets from midnight this morning for the first time to allow customers to buy their turkey and trimmings. Internet shopping experts believe there will be 20million more visits to web stores on Christmas Day this year, taking the total to 82million.

Britons are the most avid internet shoppers in the world, according to a recent official study by telecoms and broadband regulator Ofcom. An average UK resident spends over £1,000 a year shopping online, which is more than in any other country, even the United States. Purchases of downloads of films, books, music and games will be huge, linked to the fact that millions of tablet computers, such as Amazon’s Kindle series, Apple iPads and Google Nexus devices, will be opened tomorrow morning. Boxing Day will be the biggest day of the year for web shopping – overtaking ‘Mega Monday’ at the beginning of December – according to IMRG, the trade body for online retailers, and Experian, which measures traffic to websites through its Hitwise index. There are expected to be 126million visits to UK retail websites on Wednesday, which would be up 31 per cent up on the 96million in 2011. The total for the day would also be 14million more than on Mega Monday, while total spending is expected to reach £472.5million. Last year, some 300,000 made online purchases at the websites of Currys and PC World between 7pm and midnight on Christmas Eve and there were 1.8million visits to its websites on Christmas Day.

Debenhams, which began its internet sale on Friday, had more than 800,000 visitors to its website on Christmas Day last year. Andrew McClelland, managing director at IMRG, said: ‘The post-Christmas sales period actually starts on Christmas Eve online and, judging by these forecasts, it certainly finds a willing audience.’ Amazon’s Xavier Garambois said: ‘Many customers are shopping on Christmas Day in a way that has previously only been seen in the retail industry on Boxing Day. ‘The digital revolution has certainly played a part in this growth and Christmas Day is our biggest day of the year for MP3 and Kindle Book downloads as many people are buying content from new devices that they have just received. ‘It’s not just digital items though, we are seeing purchases of everything from baby products to women’s clothing rapidly growing on Christmas Day.’ – Dailymail