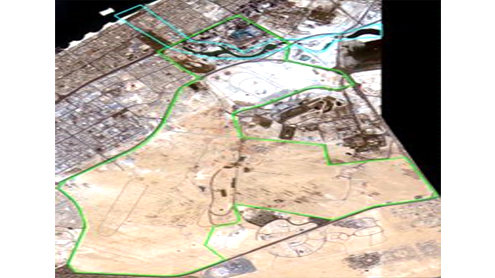 DubaiSat-1, the UAE-owned and operated earth observation satellite, has relayed a high-quality image of the area in Dubai that will be developed into the recently announced Mohammed bin Rashid City.

The satellite, which was launched by the Emirates Institution for Advanced Science and Technology (EIAST), will monitor the MBR City project and provide images every month to highlight the project’s progress.The high-resolution images relayed by DubaiSat-1 are a valuable resource for infrastructure planning and development across the country. These images provide spatial information essential to decision-making on urban and rural planning, transport and utilities development, mapping and environmental conservation initiatives. EIAST, as part of its mandate of conducting research using satellite data, has been mapping some of the major construction projects in Dubai.

The satellite images also complement existing Geographic Information System (GIS) databases and enable more efficient monitoring of environmental changes and natural hazards in addition to identifying water quality in the Gulf.“DubaiSat-1 is a key element in the development process taking place in Dubai. The satellite highlights the commitment of EIAST to create a knowledge-based economy by leveraging satellite technology,” said Salem Al Marri, Head of Marketing and International Affairs at EIAST.

MBR City, announced in November this year, will feature world-class leisure and retail facilities and provide an integrated environment for the development of entrepreneurship and innovation. The landmark project will be located between Emirates Road, Al Khail Road and Sheikh Zayed Road.DubaiSat-1 was a joint project between the UAE and South Korea, developed with a focus on knowledge transfer to the UAE team that participated in building the satellite. EIAST had launched DubaiSat-1 in July 2009, and since then the satellite has been transmitting images that are of great value in several areas.

EIAST is currently working on the final stages of DubaiSat-2, a joint development programme with the Satrec Initiative of South Korea. Sixteen UAE engineers, currently stationed in South Korea, have been working on the design, development, testing and manufacturing of the satellite. The participation of UAE engineers in the project has increased by 100 per cent compared to DubaiSat-1 and it is hoped DubaiSat-2 will take EIAST to the next level in space research. – Khaleejnews