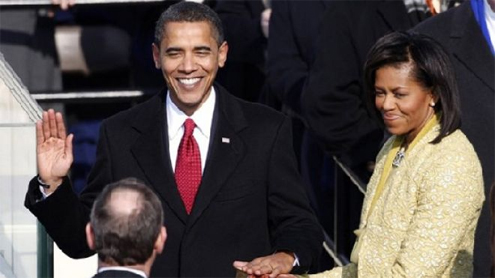 WHITE HOUSE: As it does every four years, Washington is preparing for the spectacle of a presidential inauguration.  But President Barack Obama’s second inaugural will be smaller than the first.

A record crowd, as large as 1.8 million people, jammed into Washington’s National Mall in January 2009 to see the historic swearing-in of the first African-American president.Obama’s public swearing in this time will be on January 21, one day after the start of his second term because that day will fall on a Sunday. This inauguration is likely to attract a smaller crowd — forecast at between 600,000 and 800,000 people.

Yet, Army Major General Errol Schwartz, commander of the 6,000 National Guard soldiers who will manage the crowds, says preparations have not changed.“Even though the crowd set is smaller, we are still looking at what are the possibilities that may occur within the smaller crowds,” he explained.Washington’s big event will still be just that.A joint Congressional committee has spent $1.2 million on the platform at the Capitol, where Obama will take the oath, and on the ceremony itself.

After the president is sworn in, gives his speech and attends a Congressional luncheon, the Presidential Inaugural Committee takes over.It manages the inaugural parade and related events.Construction on the reviewing stand began shortly before the November election. From here, the president will watch the parade.  The stand will be finished just before the event…And demolition will begin the next day.

The military’s extensive involvement in Inauguration Day is coordinated by the Joint Task Force, which includes all the military’s branches.Several thousand military personnel will take part in the ceremonies, including honor guards, color guards, bands and horse units.Army Major General Michael Linnington leads those personnel.  He says the participation of people in uniform symbolizes civilian control of the military and the peaceful transfer of power.

“It is a symbol of our strength and our democracy, and I think it is an important event for us to do right in front of the eyes of the world,” he said.To see that the military aspects are done right, the Joint Task Force has built a giant map of Washington.  Officers are are using the model of the nation’s capital to work out logistics, such as how to move hundreds of thousands of people into and out of the city, and how to keep the president and everyone else safe in the process. – VOA