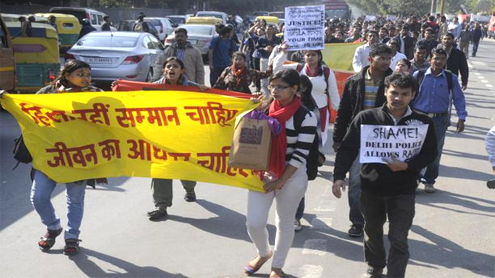 Two suspects in the gang-rape case that has shocked the nation’s conscience confessed to their involvement in the gruesome crime in a court here on Wednesday, even as the capital witnessed a slew of angry protests.

Sharing the widespread outrage, Prime Minister Manmohan Singh said: “It is a heinous crime. It is very upsetting,” while receiving a delegation of women Members of Parliament. Dr. Singh has reportedly directed the Home Minister to ensure that the culprits were brought to justice and such cases did not recur. Angry members raised the issue for the second successive day in Parliament.

Produced in court to seek their consent for a test identification parade (TIP), Pawan Gupta (19) and Vinay Sharma (20) refused the TIP but broke down when asked by Metropolitan Magistrate Sandeep Garg their reasons for refusal. “I have done a horrible thing…I have done a bad thing,” said Pawan Kumar, a fruit seller. Vinay Sharma, an assistant gym instructor, pleaded: “I confess to my guilt. I beat up the boy. I did not do anything to the girl. Hang me.”

The third suspect, Mukesh (26), who was allegedly driving the vehicle when the 23-year-old woman was gang-raped, consented to presenting himself for the TIP, which will now be conducted at Tihar Central Jail on Thursday at 3 p.m. While Mukesh was remanded in judicial custody for 14 days, Pawan and Vinay were remanded in four-day police custody.Another court recorded the statement of the victim’s male friend, who is also the complainant in the case, under Section 164 of the Criminal Procedure Code making it admissible during trial as evidence.

Meanwhile, the condition of the 23-year-old girl continues to be “stable but very critical” at Safdarjung Hospital. A team of doctors conducted a two-hour operation on the victim in the morning to remove the gangrenous part of her intestine. The abdomen was opened, cleaned and closed. Her vital parameters (blood pressure, heart rate, urine output and platelet counts) are stable.Taking serious note of the incident, the Delhi High Court on Wednesday virtually took charge of monitoring of the investigation by asking the Delhi Police not to file the charge sheet without getting it vetted by it. It also directed the police to maintain high standards of investigation. – Thehindu