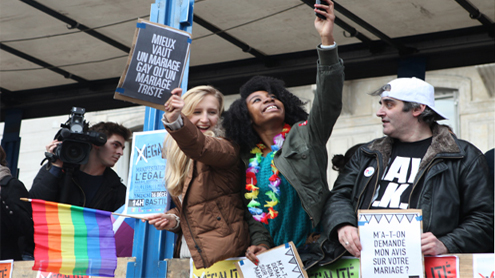 Tens of thousands of demonstrators gathered in the French capital Paris on Sunday in support of the government’s plans to legalise same sex marriage and adoption. The issue, which has drawn opposition, is due to be debated in parliament January 29.

Tens of thousands of demonstrators turned out in France on Sunday to show support for the government’s plans to legalise gay marriage and adoption.Organisers said 150,000 people gathered in Paris at the Place de la Bastille for the “demonstration for equality”. Police said 60,000 took part.They have called for another demo on January 27, two days before the French parliament is to debate the gay marriage bill.Several elected officials wearing their tri-coloured sashes could be seen alongside parents pushing strollers and children with multi-coloured balloons at Sunday’s event.

Carrying banners reading “Equal rights are not a threat” and “The right for all to choose”, demonstrators urged the government to push ahead with the reform.”I think marriage is good for everyone!” said 10-year-old Arthur, at the rally with his eight-year-old sister Lola and their two mothers.One of them, Christelle, said it was unfortunate that the debate over gay marriage in France had turned ugly in recent months.”For the first time our children have experienced homophobia that shocked them,” she said, adding that this only “makes me want to fight even harder for gay marriage”.

Several thousand people took to the streets of the southwestern city of Toulouse to protest homophobia and call for equal rights for gays.And rallies drawing thousands were held in other French cities including Marseille, Lyon and Nantes on Saturday to back the reform.France’s parliament is to debate the government-backed “marriage for all” bill early next year.With President Francois Hollande’s Socialists enjoying a strong majority, the bill is expected to pass despite vehement opposition from the right and religious groups.

Mass opposition marches took place across the country last month to denounce the bill, and opponents, including some prominent Church leaders, have said gay marriage will open the door to polygamy and incest.Another protest against the bill has been called for January 13.A nationwide poll by firm IFOP released on Saturday showed 60 percent of respondents in favour of legalising gay marriage and 46 percent backing adoptions by same-sex couples.

At a demonstration in Toulouse by anti-gay protesters on November 17, police used tear gas to separate them from demonstrators supporting same-sex marriage.Meanwhile in Vatican City on Sunday, gay rights campaigners held a small protest near St Peter’s Square during Pope Benedict XVI’s weekly prayers after the pontiff said legalising gay marriage threatened the institution of marriage.Around 15 activists held up colourful paper hearts with various slogans written on them such as “Gay Marriage”, “Love Has No Barriers”, “Talk About Love”, “Homophobia = Death” and “Marry Peace!”

One of the hearts read “Love Thy Neighbour”.The protesters were prevented from accessing St Peter’s Square, which was packed with tens of thousands of faithful to hear the pope recite the Angelus on the third Sunday of Advent.On Friday, in a message intended for World Peace Day on January 1, the pope reiterated the Catholic Church’s position against gay marriage.He called for promotion of “the natural structure of marriage as the union of a man and a woman in the face of attempts to make it juridically equivalent to radically different types of union.”Such attempts actually harm and help to destabilise marriage, obscuring its specific nature and its indispensable role in society,” he said. – France24