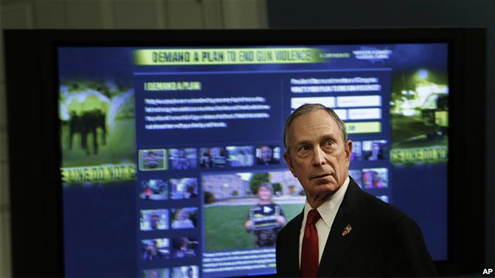 NEW YORK: There is a political move toward new restrictions on gun ownership rights in the United States in the wake of Friday’s school shooting in a small New England town.

Following President Barack Obama’s remarks suggesting he would back new gun bans, at least two conservative Democrats say they are changing their positions and considering new action to restrict guns.  And in New York Monday, Mayor Michael Bloomberg gathered victims and families of mass shootings to push for a ban on the sales of assault weapons.hirty-four citizens from across the country joined Bloomberg in unveiling a video campaign that demands that the U.S. government control gun violence.   The City Hall news conference follows the massacre of 20 youngsters and six educators in  Newtown, Connecticut last Friday.  Mayor Bloomberg, a  co-chair of the organization Mayors Against Illegal Guns, challenged the president and Congress to pass new gun control legislation.

“Last night the president said he would use whatever powers his office holds to address this violence.  I think it is critical he do so,” Bloomberg said. “Words alone cannot heal our nation. Only action can do that. Gun violence is a national epidemic and a national tragedy that demands more than words.  We are the only industrialized country that has this problem.The mayor added that if this moment passes without action from Washington, it will be a stain on our national commitment to gun safety.  The 34 Americans whose families were touched by gun violence added to the mayor’s message.

“He had a future ahead of him,” lamented Chris Foye, who lost his 13-year-old son on a New York street.  “The incident itself actually destroyed me and my family. And it was the worst pain a parent could ever go through.”Lori Haas’s daughter was shot and wounded in a shooting at Virginia Tech University in 2007.“I read in the paper the other day that we’ve had over 2,000 soldiers die in Afghanistan and how horrible that is,” she said. “And it is horrible but in that same eight-year time span we’ve had 96,000 American citizens killed by guns in this country.  Something is terribly, terribly wrong.”

There has been no official comment from the National Rifle Association, a strong pro-gun advocacy group. However, gun dealers have weighed in.  One of them, Earl Curtis, calls it a mental health problem.“The last three or four incidents have been males, 15 to 25 years old. Any incident that’s been done has been around that age group,” Curtis explained. “What’s causing the problem?  Why is there such a disconnect or why are they just snapping?  So mental health is really the issue here instead of gun control.”The big question remains:  will this tragedy in Newtown actually be the impetus for tougher gun control laws? – VOA

Thousands gather in Paris in support of gay marriage