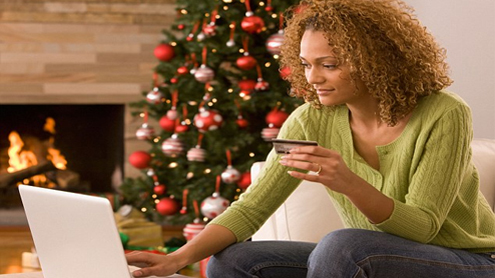 Millions of shoppers are turning to the internet phenomenon of money-off web vouchers and discount codes to help pay for Christmas.

There has been a 30 per cent increase in the number of UK retailers offering vouchers online since the beginning of the month, taking the total to more than 3,000, industry experts say.The deals effectively amount to secret sales, allowing careful shoppers to make savings of up to 60 per cent.Many retailers have already launched online sales, including Next and Debenhams, while others are slashing prices in the high street.

However, there is a separate and thriving voucher market operating via an estimated 200 UK websites and another 21 daily deal sites.Among current deals, The Body Shop’s voucher code offers a 40 per cent saving on orders over £5 including free delivery, while there is 15 per cent off all Homebase online purchases. BHS offers savings of up to 60 per cent on homeware, and fashion chain Phase 8 has up to 50 per cent off.

Thorntons, HMV, Waterstones, Hotel Chocolat, Urban Outfitters, Halfords and many others have voucher deals to tempt Christmas shoppers.Dominic Yacoubian, chief executive of VoucherComparison, said the number of stores offering web vouchers is up by 725 to 3,247 since the beginning of December.The number of people visiting his website in search of the latest discount shopping codes has quadrupled on some days.‘Everybody wants a little extra cash to splash on Christmas presents in December. The easiest way to do this is to take advantage of all the voucher codes on offer,’ he said.

Research by the website NetVoucherCodes suggest shoppers could save an average of £129 by taking advantage of the internet discounts.A spokesman said: ‘From our database of members we have also seen a rise in the number of affluent households now searching our site for voucher codes and discounts.’The huge discount voucher culture has emerged in tandem with the biggest squeeze on living standards in more than 60 years.

Supermarkets including Tesco and Sainsbury’s have been issuing a blizzard of money-off vouchers at tills and through loyalty schemes.Manufacturers such as Unilever, which makes products as diverse as Persil and Flora, have their own coupons, while Gap and other fashion chains regularly offer vouchers promising savings of as much as 30 per cent on shop prices, a tactic copied by Boots and other stores.In addition, about 10million Britons a day receive offers via email, some offering vouchers for sale that offering savings on everything from cheap flying lessons to teeth whitening or a stay at a luxury hotel.