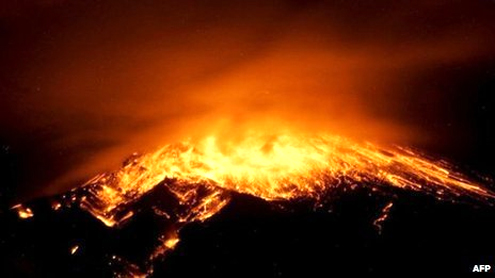 People living on the slopes of the Tungurahua volcano in Ecuador are being evacuated as a plume of gas and ash rises from its crater.

Tungurahua volcano began to erupt again last week, prompting the government to issue an orange alert, the second highest.Lessons were suspended in schools in the nearby town of Banos as ash started to rain down.Seismologists said they had registered a series of explosions overnight.

Residents reported hearing a roaring sound so loud it shook their windows. They said the explosions sounded like cannon fire.The volcano, which became active again in 1999 after a long period of dormancy, lies 135km (85 miles) south-east of the capital, Quito. – BBC