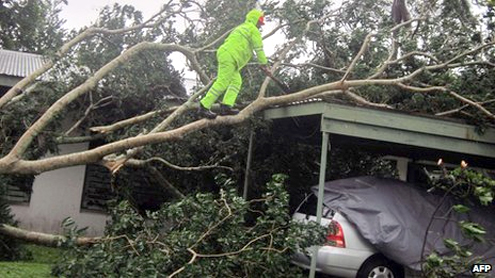 The biggest cyclone to hit Fiji in 20 years has caused havoc after battering the Pacific nation with winds topping 200km/h (125 mph).

Thousands of people hid in evacuation centres when the category-four storm hit on Monday, wrecking homes, cutting power and causing flash floods.The cyclone has since been downgraded and is expected to weaken further as it heads into cooler southern waters.No deaths have been reported. Last week Evan killed several people in Samoa.The neighbouring archipelago had no advance warning when the tropical storm struck late last week. Samoan authorities told the AFP news agency at least five people had died, with up to 10 still missing.

In Fiji, western parts of the main island Viti Levu were the hardest hit by Cyclone Evan. The nation’s second-largest city, Lautoka, looked like a “war zone” in the aftermath of the storm, the Fiji Times reported.Heavy rains caused rivers to swell, flooding roads and bridges, while strong winds blew down power lines and tore roofs off buildings, officials said.Families were forced to leave their homes because of unsafe building structures in the outer islands.More than 8,000 people sought shelter in 137 evacuation centres, the Ministry of Information said.

Thousands of tourists are also reported to have been relocated from surrounding islands to Viti Levu’s resorts to wait for the storm to pass.Flights in and out of Fiji were cancelled on Monday.Police limited the movement of people in and out of the main towns and cities to protect businesses from looters, according to local media reports.Water supply to rural areas has been interrupted as a result of the power cuts, the Water Authority of Fiji said.Evan was downgraded to a category-three storm as it moved off Fiji on Monday night and was forecast to weaken further on its journey toward cooler southern waters the Fiji Metrological Service said.Australia and New Zealand have offered expert personnel and supplies to both Samoa and Fiji. – BBC

Egypt’s Judges Club to boycott second round of constitutional referendum