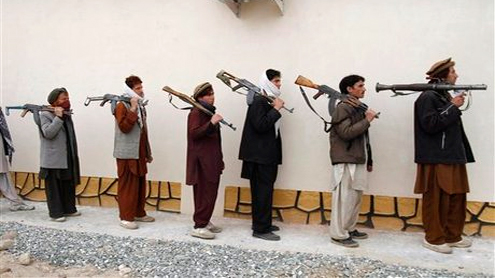 KABUL: The Taliban said on Monday they would attend a conference in Paris on Afghanistan this month but would not hold peace talks with Afghan government delegates or other groups.

A member of Afghanistan’s government-appointed High Peace Council said however that its representatives would meet the Taliban. “Obviously, yes we will, as we all attend the same conference. And we could also meet them on the sidelines of the meeting,” Din Mohammad, who is also a cabinet minister, said.President Hamid Karzai has long sought peace talks with the Taliban, who have waged an 11-year insurgency, but the Islamists have dismissed his government as a puppet of the United States. “We welcome any conference that is aimed at peace and stability in Afghanistan,” presidential spokesman Aimal Faizi said.

Taliban spokesman Zabiullah Mujahid said in a statement that the militants had accepted an invitation to attend the conference, which French government sources described as an internal Afghan colloquium on the future of the country. “The Taliban in this conference will express its stance to the world community and we will send two representatives,” he said.“We must clarify that no talks with anyone are involved. This is only a research conference and the representatives of the Taliban are attending the conference only to address directly the world about their views face to face.”

The Taliban said their invitation was recognition that the “Taliban are not just a simple movement (but) a movement with roots among the people”. “The Americans came to accepting the Taliban as a reality,” it said. Preliminary contacts between the US and the Taliban in Doha were broken off in March when the militants failed to secure the release of five of their senior members held in Guantanamo Bay. – Dailytmes