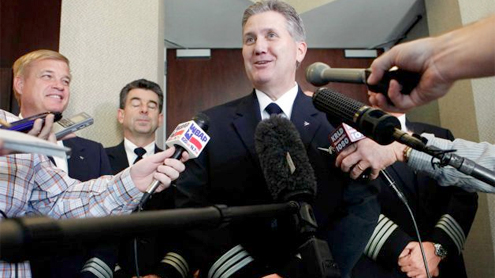 DALLAS: American Airlines CEO Thomas Horton suggests that his management team has earned the right to keep leading the company even if it merges with US Airways.

The approval of a new labor contract by pilots last week was the last major hurdle American and parent AMR Corp. needed to clear before emerging bankruptcy protection in the next few months. American is positioned to finish its Chapter 11 restructuring faster than Delta Air Lines and United Airlines did theirs last decade.”If you look at the speed and the result of this restructuring, I think it stands apart from all the others,” Horton said Monday. “This team has done an outstanding job, and I’m very proud of them.”

American’s unions, however, are pushing for new management, and some analysts agree with them.Tom Hoban, a spokesman for the American Airlines pilots’ union, said a merger with US Airways would make American bigger and “bring in a revitalized management team.” He said employees want “leadership and vision, something has been sadly lacking” since Robert Crandall retired as American’s CEO in 1998.

Vicki Bryan, an analyst with bond-research firm Gimme Credit, said AMR’s management hasn’t done enough to boost revenue or reduce debt. “They’re not even paying all their bills (because of bankruptcy protection), and they’re still not as profitable as US Airways,” she said.In the third quarter, AMR lost $238 million. It would have earned $110 million excluding bankruptcy-related costs and other special items. US Airways Group Inc. earned $245 million despite having less than half of AMR’s revenue.

Other airline industry observers believe Horton should run AMR, whether or not there is a merger.Darryl Jenkins, a longtime industry consultant, said Horton is correcting old problems at American, including high labor costs and a lack of focus on attracting high-paying corporate travelers.”He has the opportunity to be the best CEO American has ever had,” Jenkins said. “He did a good job (in bankruptcy), and did it relatively quickly.”

American has boosted an important revenue measure faster than competitors, and it has returned to profitability, if you exclude the bankruptcy costs.American and AMR filed for bankruptcy protection in November 2011. In an interview Monday with The Associated Press, Horton said the financial rebuilding is “essentially complete,” and the only question left is whether to pursue a merger.

US Airways has been pushing for a merger that would put its executives in charge. But Horton said that a deal could happen after his airline emerges from bankruptcy, which raises the possibility that American could buy US Airways.If AMR and US Airways are to merge on friendly terms, they must decide who gets how much stock, and which airline’s management would run the new company. If there is no friendly deal, US Airways could make a hostile takeover bid. US Airways has outlined a proposal to AMR creditors, according to a people familiar with the private talks.

Horton said AMR will finish its consideration of a potential merger “soon” — the same timetable he offered in a letter to employees on Friday — but declined to be more specific. He said even if it remains independent, AMR’s board would likely consist of a mix of holdovers and new members representing creditors, which is common in bankruptcy cases.