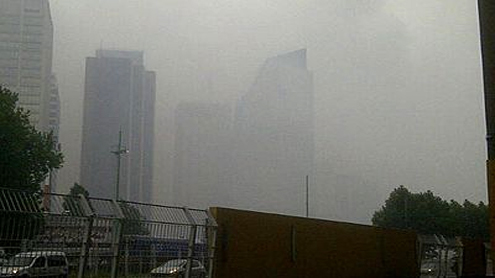 A toxic cloud has covered parts of Buenos Aires, causing alarm and leading to the evacuation of many buildings.

The authorities say the smoke was caused by a fire in a container with pesticides at the city’s port, but the situation is now under control.Hundreds of people experienced nausea, eye irritation and other symptoms.Buenos Aires Security Minister Sergio Berni said there were no health risks due to the “low toxic levels” of the pesticide, which was produced in China.

The toxic smoke affected Puerto Madero, Congreso, San Telmo and other central areas of the Argentine capital.Residents and office workers went out with their faces covered by scarves or masks.They complained of a strong, unpleasant smell, even inside office buildings.

Flights at a nearby airport were temporarily suspended and a motorway was closed during the morning.The container had come from Shanghai, China, and was bound for Paraguay, La Nacion newspaper reported.According to the Argentine Health Ministry, it contained a Chinese carbonate-based pesticide commonly used on grain fields. – BBC

Chancellor announces £77million fighting fund to crack down on companies

Chancellor announces £77million fighting fund to crack down on companies