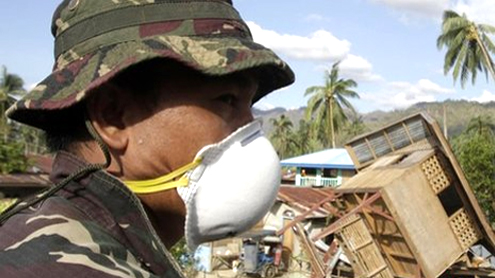 More than 300 people have died and hundreds more are missing in the wake of Typhoon Bopha, which cut a swathe of devastation across the southern Philippines.

The Civil Defence Office said at least 325 people were confirmed dead and another 379 missing.People were killed in eight provinces but eastern Mindanao was worst-hit.In Compostela Valley province alone at least 184 people died, many when flash floods hit emergency shelters.”We have 325 dead and this is expected to rise because many more are missing,” civil defence chief Benito Ramos told a news conference early on Thursday.

“Communications are bogged down, there is no electricity, roads and bridges have been destroyed,” he said. “We’re still on a search-and-rescue mode.”The storm struck Mindanao island on Tuesday, bringing very high winds and heavy rain. Roofs were blown off houses and the rain led to both landslides and flooding. Tens of thousands of people were moved to shelters ahead of the typhoon, but in one town in Compostela Valley the shelters themselves were swept away by flash floods.

“According to [survivors], there is a small lake on the mountain that gave way so the waters flowed down, not just along the rivers… but all across, like a waterfall, bringing a slurry that covered the whole town,” Interior Secretary Mar Roxas said.Rescue teams are still working to reach communities in some isolated areas.One injured man was found alive in a river in New Bataan on Thursday morning.Carlos Agang said he had been swept away when flash floods hit his home, ending up pinned down by boulders and debris downstream. He said he did not know where his wife and children were.

“I was shouting for help all the time, but no one came. I don’t know what happened to [my family]. Perhaps they are all dead,” Mr Agang told AFP news agency.The typhoon came almost a year after Typhoon Washi struck northern Mindanao with devastating consequences. More than 1,300 people died when that storm struck, as rivers burst their banks and swamped communities.The UN said that improved early warning systems had saved lives this time.

But President Benigno Aquino said more needed to be done.”Any single casualty is a cause for distress. Our aim must always be about finding ways to lessen them,” he said.The typhoon is now moving past the Philippines into the South China Sea.The US has offered help to both the Philippines and Palau, which was also hit by the storm earlier in the week.”Our embassies in Manila and Koror have offered immediate disaster relief assistance, and we are working closely with authorities in both countries to offer additional assistance as needed,” deputy State Department spokesman Mark Toner said in a statement. – BBC