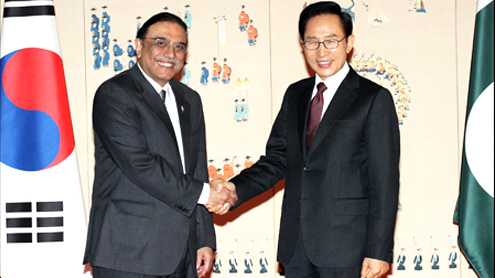 Pakistan’s leader said Tuesday that he would fully support the denuclearization of the Korean Peninsula during a summit with President Lee Myung-bak held at Cheong Wa Dae.

This came amid North Korea set to launch a long-range rocket between Dec. 10 and 22.During the summit, President Asif Ali Zardari was quoted as saying that “Pakistan would continue to make an effort for world peace and back the effort to denuclearize the peninsula.”Presidential spokesman Park Jeong-ha quoted the Pakistani leader as saying he hopes the two nations can work together to make a better future.

In response, Lee said he hopes the countries team up to improve global human rights and other global issues at an international level.During the summit, the two exchanged ideas on improving ties in trade, infrastructure building, energy and development assistance.Lee and Zardari noted that bilateral trade last year marked $1.56 billion and that Korean firms expanded operations in the chemical, steel and transportation sectors as well as infrastructure building in Pakistan.

The Pakistani leader congratulated Korea on becoming a non-permanent member of the United Nations Security Council.After the summit, Korea and Pakistan signed a development assistance pact and a memorandum of understanding to cooperate in Pakistan’s railway industry.Under the development assistance agreement, Korea agreed to help with aid projects, invite Pakistani officials for training and send volunteers and experts to Pakistan.The Lee-Zardari summit was followed by a luncheon also held at Cheong Wa Dae.Next year will mark the 30th year anniversary of Korea-Pakistan diplomatic relations. – PT