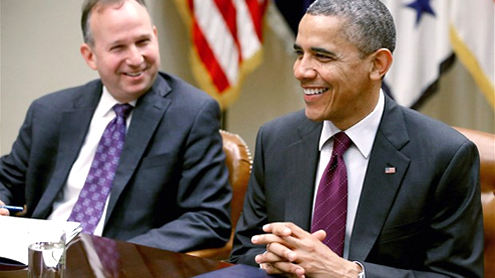 Barack Obama made his first offer to compromise with Republican leaders in crisis talks to prevent the US from going over the “fiscal cliff” and potentially throwing the world back into recession.

The US president signalled that he may accept a smaller rise in the top income tax rate and make Americans wait longer for health benefits – but again insisted that taxes must rise for the richest.On Tuesday, in his first interview since being re-elected last month, Mr Obama claimed that the US economy was “poised to take off” but was being jeopardised by “silly games” played by Republicans in Congress.

They are resisting his demand that any plan to replace the so-called “cliff” – across-the-board tax hikes and sharp spending cuts scheduled for January 1, which economists warn could trigger a new recession – must include a higher rate of income tax for the top two per cent of earners.”I’m happy to be flexible – I recognise that I’m not going to be able to get 100 per cent,” Mr Obama told Bloomberg News. “But what I’m not going to do is to agree to a plan that has some revenue that is vague, and potentially comes out of the pockets of middle class families”.

The president spoke a day after Republicans delivered their counter-offer to his audacious opening bid in the negotiations in Washington, which his opponents said left them “flabbergasted”.As part of a plan to save $4 trillion (£2.5 trillion) over a decade, Mr Obama wants $1.6 trillion (£1 trillion) in extra tax revenue from a package including a hike in the top rate of tax to 39.6 per cent from 35.Refusing to raise rates, the Republicans say they would raise half as much new revenue as Mr Obama by closing loopholes and limiting earners’ tax deductions for things such as mortgage payments.

Yet Mr Obama claimed this was impossible and reiterated that rates must rise for households earning more than $250,000 (£155,000) a year for enough new revenue to flow into the Treasury.”It’s not me being stubborn, it’s not me being partisan – it’s just a matter of math,” Mr Obama said. “We’re going to have to see the rates on the top two per cent go up, and we’re not going to be able to get a deal without it”.However he pointedly did not reject a suggestion that he would be willing strike a deal in which the top rate ended up lower than his goal of 39.6 per cent, where it stood in 2000 when Bill Clinton left office.

Asked directly later Tuesday whether this meant Mr Obama was ready to compromise, Jay Carney, the White House press secretary, would only say: “Rates are going up. They have to go up.”Mr Obama’s team has suggested that it is prepared to allow the US to fall off the “cliff” rather than agree to a deal in which rates do not rise for top earners. Polls indicate that a majority of the American public would blame the Republicans for holding a deal hostage in order to protect the richest.

However the president insisted that “we have the potential of getting a deal done,” arguing that the Republican plan “right now is still out of balance” and required drastic changes.He appeared prepared to discuss a Republican plan to cut billions of dollars in health spending by raising the age at which Americans can join Medicare, a benefit scheme, from 65 to 67.”I am willing to look at anything that strengthens our system,” Mr Obama said when asked if the age threshold was “on the table”. Republicans are demanding $600 billion (£373 billion) in cuts to health spending, while Mr Obama has suggested $350 billion (£217 billion).

Mr Obama dismissed the notion that his frosty relationship with John Boehner, the House Speaker, was damaging the negotiations. The pair did not speak at a White House Christmas party for congressmen at the White House on Monday night and have been unwilling to meet. “I don’t think that the issue right now has to do with sitting in a room,” Mr Obama said. – Telegraph