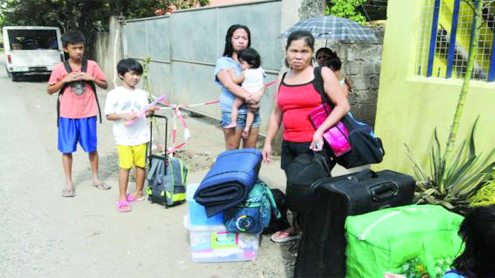 MANILA: Thousands of villagers fled from their homes yesterday as a strong typhoon roared closer to the southern Philippines, prompting authorities to suspend sea travel in high-risk areas and halt gold-mining in a mountain town notorious for deadly landslides.

President Benigno Aquino III appeared on nationwide TV to appeal to people in Typhoon Bopha’s path to move to safety and take storm warnings seriously even though many communities were still basking in sunny weather Monday.“This typhoon is not a joke,” Aquino said after meeting top officials in charge of disaster-response.“It could be the strongest to hit the country this year,” he said. “But we can minimize the damage and loss of lives if we help each other.” The storm was approaching from the Pacific Ocean with sustained winds of 175 kilometers per hour and gusts of up to 210 kph.

Its eye was last tracked at 390 kilometers (242 miles) southeast of Surigao del Sur province’s Hinatuan township and the typhoon was expected to hit land around dawn on Tuesday.Bopha, which has a 600 km wide rain band, was expected to barrel across southern and central provinces before blowing out into the South China Sea on Thursday, according to government forecasters.Aquino said army troops were deploying search and rescue boats in advance and villagers were being pre-emptively evacuated.

Authorities ordered small boats and ferries not to venture out along the country’s eastern seaboard, warning of rough seas and torrential rain and wind that could whip up four-meter waves.Thousands of villagers moved out of their homes in high-risk coastal villages and along rivers, including in southern provinces that were devastated in December by a deadly storm. In the mountainous Compostela Valley, authorities halted mining operations and ordered villagers to evacuate to prevent a repeat of deadly losses from landslides and the collapse of mine tunnels seen in recent storms.

Residents in a riverside village that was wiped out by the storm in December in southern Cagayan de Oro city moved to a government hall, carrying TV sets, bundles of clothes and a pig.Nearly 8,000 villagers were moved to four government shelters in Hinatuan, the coastal town that was directly in Bopha’s path until the typhoon began to veer slightly, officials said.Bopha, a Cambodian word for flower or a girl, is the 16th weather disturbance to hit the Philippines this year, less than the 20 typhoons and storms that normally lash the archipelago annually. Forecasters say at least one more storm may hit the country before Christmas. – Arabnews