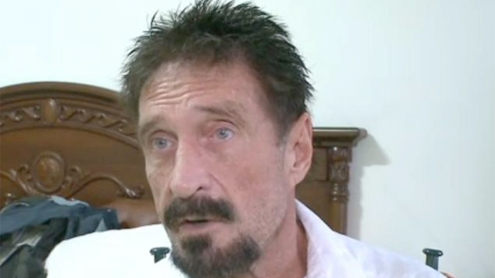 MEXICO CITY: U.S. anti-virus software guru John McAfee said on Monday he has left the Caribbean country of Belize where police want to question him in connection with a neighbor’s murder, and will not turn himself in.

“I am not in Belize. That is all I will say,” McAfee told Reuters by telephone from an undisclosed location. “Every bordering country around Belize, for political, financial, legal reasons, is pretty much like Belize and our plan is … to arrive in a safe country.”McAfee has been in hiding for three weeks since police in Belize said they wanted to question him as “a person of interest” about the murder of fellow American Gregory Faull, with whom McAfee had quarreled.

McAfee says he believes authorities in Belize would kill him if he turned himself in for questioning. Belize’s prime minister has denied the claim and called the 67-year-old paranoid and “bonkers”.”They have killed many people who’ve turned themselves in. The last one was a gentleman … who turned himself in. They just wanted him for questioning. They handcuffed his hands behind his back and shot him 14 times,” McAfee said.

“They did say he tried to grab a gun and escape, he was surrounded by a dozen GSU (Gang Suppression Unit) people. I don’t imagine he’d have had much chance, and he was a smart man, so I do not intend to turn myself in,” he said.Residents of the Caribbean island of Ambergris Caye where McAfee lives and others who know him describe as an eccentric, impulsive man who quit a career as a successful entrepreneur in the United States for a life of semi-seclusion in the former pirate haven of Belize.

McAfee has been posting updates from hiding on his blog www.whoismcafee.com, saying he is accompanied by two journalists from Vice magazine and a woman called Sam.McAfee said on his blog he had sent a body double to the Belize-Mexico border to act as a smokescreen and help him elude authorities.”My double, carrying a North Korean passport under my name, was in fact detained in Mexico for pre-planned misbehavior,” McAfee wrote on the blog.

“But due to indifference on the part of authorities (he) was evicted from the jail and was unable to serve his intended purpose in our exit plan. He is now safely out of Mexico.”Police in Belize say McAfee is still at large and are looking for him. “We still believe that he is here, somewhere in the country,” said police spokesman Raphael Martinez.McAfee, who started McAfee Associates in 1989, has been living in the tiny Central American nation for about 4 years. – Yahoonews