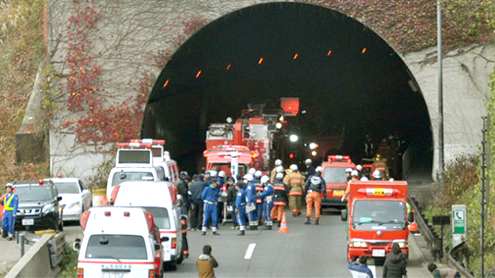 At least eight people have been confirmed dead, after a highway tunnel in central Japan partially collapsed Sunday morning, sparking a fire, and trapping three cars inside.

Yamanashi police say the charred remains of five victims were pulled from a rental van nearly seven hours after the accident at the Sasago Tunnel, 50 miles west of the capital city. Late Sunday night, search crews found the driver of another truck dead, crushed under debris, about a mile from the tunnel exit.The driver had called his company earlier in the day, to say he was trapped inside the tunnel, but heavy smoke and fears of another collapse hampered rescue efforts, according to broadcaster NHK.

Two other victims were killed inside a separate car.Video from surveillance cameras inside the tunnel showed concrete slabs, as many as 150, caved in, with cars flattened underneath. Aerial images of the scene showed black smoke billowing out of the tunnel.Witnesses report a frantic scene following the accident. More than 20 cars including a tour bus were passing through at the time, but many passengers managed to escape the flames.

“The ceiling just caved in, so I couldn’t tell if it was dust rising or smoke,” one witness told NHK. “I wasn’t able to see anything in front of me.”The collapse occurred about 2 miles from the exit of the roughly 3 mile long tunnel, bound for Tokyo, according to Central Nippon Expressway or NEXCO, which operates the tunnel. Concrete ceiling panels came crashing down on cars passing through, triggering a fire.

Firefighters and rescue crews were dispatched to the scene, but heavy smoke slowed efforts early in the day.Sunday afternoon, they temporarily suspended the search, fearful of another collapse, but emergency crews resumed efforts in the evening, in search of those still unaccounted for.The Sasago tunnel is located on the Chuo Expressway, a major thoroughfare that runs from Tokyo to the city of Nagoya. It was built in 1977 and had just passed a routine inspection in September, according to NEXCO officials. – Yahoonews