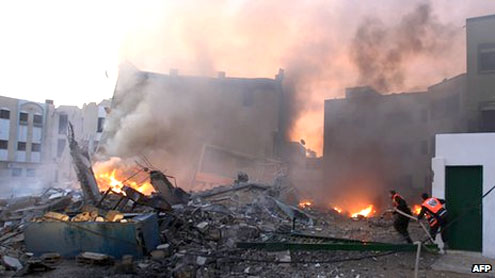 Israel’s aerial bombardment of Gaza has intensified after it authorised the call-up of 30,000 army reservists, amid reports of a possible ground offensive.

Israel said it fired at more than 130 targets in Gaza overnight, saying militants fired 11 rockets from Gaza.On Thursday rockets were fired 70km (45 miles) north of Gaza towards Tel Aviv.Fighting has intensified since Israel killed Ahmed Jabari, the military leader of the Islamist group that controls the territory, on Wednesday.At least 18 Palestinians in Gaza have been killed in Israeli airstrikes, including children, and three Israelis have been killed by Palestinian rocket fire into southern Israel.

Egyptian PM Hisham Qandil is to travel to Gaza later in a show of support. Israeli Prime Minister Benjamin Netanyahu has said his country’s offensive action would be suspended during the visit, as long as no rockets were fired from Gaza.Explosions continued in Gaza throughout Thursday night as Israel stepped up its air bombardment, with huge blasts rocking Gaza City as dawn broke on Friday.Palestinian militants have continued to fire rockets at Israeli cities: by Thursday night, Hamas said it had fired more than 350 rockets from Gaza, of which Israel said 130 had been intercepted by its Iron Dome missile defence system.

In Tel Aviv on Thursday, residents took cover after air raid sirens alerted them to a missile threat for the first time since Iraq targeted the city with Scud missiles during the Gulf War in 1991. One missile landed in an uninhabited area while another is thought to have landed in the sea.The armed wing of Islamic Jihad said it had fired an Iranian-built, Fajr-5 rocket – which has an estimated range of 75km.Israeli Defence Minister Ehud Barak said targeting Tel Aviv would “exact a price that the other side will have to pay”.

Early on Friday, Israel’s army said leaflets had been dropped over several locations in the Gaza Strip on Thursday, warning residents “to stay away from Hamas, and other terror organizations”.”Before action, the IDF disperses warning leaflets calling all civilians to evacuate the area. This happened [on Thursday],” the army tweeted.There were reports of buses of Israeli troops – and trucks loaded with tanks and armoured personnel carriers – heading towards the coastal enclave.Israeli television stations said the build-up suggested an incursion was planned, but military officials said no decision had been made.The Hamas Prime Minister in Gaza, Ismail Haniyeh, condemned what he called Israel’s “ferocious assault” against the territory. – BBC