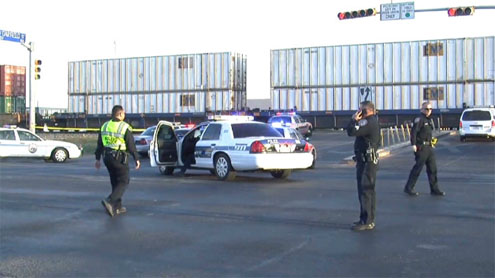 A train rammed into a flatbed truck carrying participants in a West Texas parade saluting U.S. troops on Thursday, killing four people and wounding several others, a police spokesman said.

The incident happened around 4:30 p.m. CT (5:30 p.m. ET) Thursday, during the “Hunt for Heroes” event in Midland. According to the group Show of Support, these festivities — including a banquet and, after that, an “all expense paid whitetail deer hunt” — are to honor members of all branches of the U.S. military.The last flatbed truck in the parade was crossing tracks when an eastbound train slammed into it, said Midland police spokesman Ryan Stout.Some people were able to jump off the truck in time.

First responders arrived and found two dead at the scene, while two others were later pronounced dead at Midland Memorial Hospital, said Stout. Ten other people were treated and released at the hospital. Five others remained hospitalized Thursday night, with one of them being in critical condition.Troops were among those participating in the parade, and were on the flatbed truck that was hit, but the police spokesman couldn’t say how many of those killed or injured were in the military.

Authorities don’t yet know what caused the crash, said Stout.The gates and lights at the intersection were working at the time, and the train’s two-member crew sounded the horn prior to impact, according to Tom Lange, a spokesman for Union Pacific Railroad. The train involved included more than 80 rail cars carrying double-stacked containers, Lange said.”Our thoughts and prayers are with family and friends of those affected,” he said, adding that additional Union Pacific employees are on site and more are heading that way to investigate.Lange said the train itself is operational and its crew was not injured, adding they are being offered counseling. – CNN