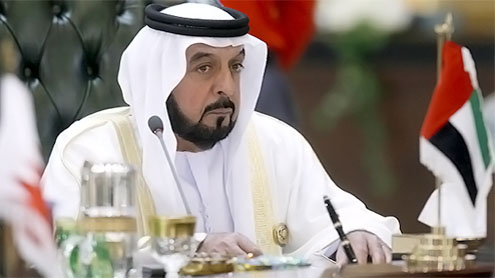 The President, His Highness Shaikh Khalifa bin Zayed Al Nahyan, has sent cables of greetings to Kings, Presidents and Amirs of Arab and Islamic countries on the occasion of the new Hijri year 1434.

Shaikh Khalifa wished good health and happiness to them, and progress, prosperity and dignity to their people.Similar cables were dispatched to the Arab and Muslim leaders by His Highness Shaikh Mohammed bin Rashid Al Maktoum, Vice-President and Prime Minister of the UAE and Ruler of Dubai, and by General Shaikh Mohammed bin Zayed Al Nahyan, Crown Prince of Abu Dhabi and Deputy Supreme Commander of the UAE Armed Forces. Shaikh Khalifa and Shaikh Mohammed were also greeted by His Majesty Sultan Qaboos bin Said of Oman and King Abdullah II of Jordan on the occasion of the new Hijri year. – Khaleejnews