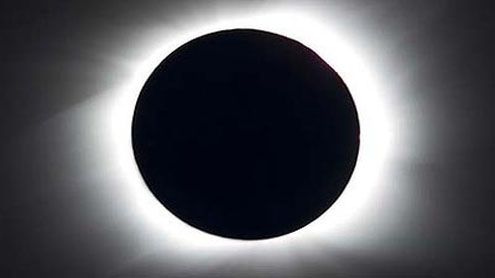 PALM COVE: Sky-gazers in northern Australia donned protective glasses and put solar filters on their telescopes on Wednesday to witness one of nature’s greatest phenomena a total eclipse of the Sun.

All eyes and cameras turned to the heavens over tropical north Queensland as the moon began moving between the earth and the sun, like a small bite which gradually increases in size, although misty cloud was hampering the view.”Still waiting for a more substantial break in the clouds. Looks like out might be better soon,” said Travis, a tourist at Palm Cove who was tweeting his experience.

The path of the eclipse got under way shortly after daybreak when the Moon’s shadow, or umbra, fell in the Garig Gunak Barlu National Park in the Northern Territory, about 250 kilometres (155 miles) east of Darwin.The umbra then moved eastward before alighting in north Queensland where thousands of eclipse tourists and scientists have flocked to witness, weather permitting, region’s first total solar eclipse in 1,300 years.

Totality when the moon completely covers the sun and a faint halo or corona appears was to last for a maximum 2 minutes and 5 seconds from 6.38am (2038 GMT Tuesday).When this happens the early chatter of birds and animals is expected to be replaced by an eerie silence and as the moon overtakes the sun, casting a shadow that plunges the land into darkness, the temperature will drop.

Fred Espenak, an American astrophysicist and world authority on eclipses, told the Australian Broadcasting Corporation that while eclipses can seem somehow magical, in fact they can be predicted accurately.”Certainly within 100 to 200 years we can predict when an eclipse will occur to within a second,” he said.”But the pattern of occurrence is a complicated one. They don’t repeat on a time schedule like the seasons of the year.”

He explained that when a total eclipse occurred “the darkest part of the moon’s shadow sweeps across the earth’s surface”.”Total solar eclipses occur once every one to two years but are only visible from less than half a percent of the earth’s surface,” he said.The rare spectacle, which is expected to be viewed live by millions around the world, has drawn thousands of eclipse tourists to Queensland with the state government estimating that 50,000-60,000 people made the trip.

They include three charter flights with 1,200 scientists from Japan while six cruise ships are moored off the coast.Scientists will study the effects of the eclipse on the marine life of the Great Barrier Reef and Queensland’s rainforest birds and animals while psychologists will monitor the impact on humans.Accommodation is solidly booked from five-star hotels to camping grounds.

Total eclipses are rare, and can be seen from a given point on Earth’s surface only once every 410 years in the northern hemisphere, but only once every 540 years in the southern hemisphere.The last total eclipse was on July 11, 2010, again over the South Pacific; the next will take place on March 20, 2015, occurring over Iceland, the Feroe Islands and Norway’s far northern Svalbard archipelago, according to Espenak. – Brecorder