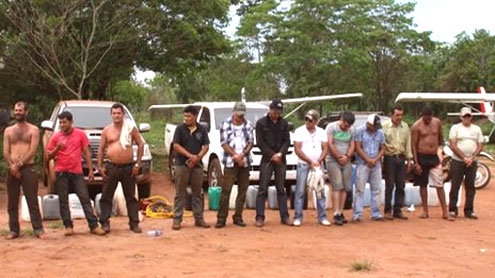 They say the drug was about to be taken on small planes to neighbouring Brazil and other countries.Police say Paraguay’s most wanted man, Ezequiel de Souza, was among the 20 people arrested at a ranch in north-eastern Paraguay.An unauthorised airstrip was found and weapons and small planes seized in the operation in Canindeyu district.

Alleged Bolivian drug lord Marco Antonio Rocca Ali, known as “El Presi”, was also arrested at the ranch on Saturday night.Paraguayan police say this is the biggest seizure of drugs in the South American country this year.The National Anti-Drug Secretariat (Senad) said it still expected to find more bags of cocaine hidden underground and in the nearby woods.

President Federico Franco congratulated the 40 agents who took part in the operation near the city of Salto del Guaira.”Paraguay is committed to fight drug-trafficking,” he said.”It will become known abroad as a sovereign nation, not as a drug-trafficking country.”Landlocked Paraguay has borders with Bolivia, one of South America’s main cocaine producers, and Brazil, which has become one of the world’s top consumers of illegal drugs. – BBC