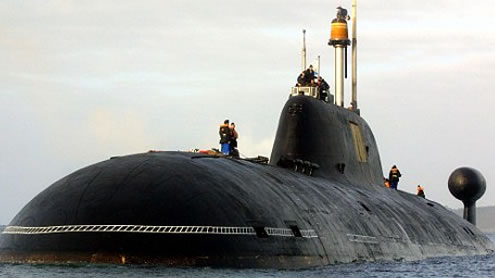 U.S. defense officials are downplaying the potential threat of a Russian attack sub detected just 200 miles from the East Coast and given safe harbor in Florida during Hurricane Sandy.

The Free Beacon’s sources spoke only on condition of anonymity because of the sensitive nature of ant-sub warfare. ‘While I can’t talk about how we detected it, I can tell you that things worked the way they were supposed to,’ one officials said, adding that the submarine ‘poses no threat whatsoever.’  Officials said the submarine was likely conducting anti-submarine warfare efforts against U.S. ballistic and cruise missile submarines at Kings Bay, Georgia. The submarine did not sail near Kings Bay or threaten a U.S. aircraft carrier group conducting exercises near it in the eastern Atlantic.

There are two guided missile submarines and six nuclear missile submarines docked at Kings Bay Naval Submarine Base. Those American vessels are a known target of Russian attack subs. However, the Russian sub was considered safe enough that it was given a safe harbor in Jacksonville, Florida’s commercial port during Hurricane Sandy, within listening range of Kings Bay. A Jacksonville Port Authority spokeswoman declined comment on the submarine.

At this time the submarine is thought to be hundreds of miles from American shorelines. The deployment could be read as an effort by the Russian navy to re-establish naval power projection capabilities. Russia said as much in February when it announcing an increase in submarine patrols in strategic waters around the world. ‘On June 1 or a bit later we will resume constant patrolling of the world’s oceans by strategic nuclear submarines,”’ Russian Navy Commander Adm. Vladimir Vysotsky said in February. ‘A Russian AGI and an SSN in the same geographic area as one of the largest U.S. ballistic missile submarine bases—Kings Bay—is reminiscent of Cold War activities of the Soviet navy tracking the movements of our SSBN’s,’ said another U.S. official.

SSBN is the designation for ballistic missile submarines. Russia’s navy carried out hundreds of submarine patrols during the Cold War to maintain first-and-second-strike nuclear capabilities. Even when the Soviet Union was in decline in 1984 it still conducted 230 submarine patrols. Today it conducts fewer than 10 a year. ‘As was their primary mission during the Cold War, Russian SSNs [nuclear attack submarines] would likely be trying to track U.S. nuclear missile submarines deploying from Kings Bay, Ga., and to monitor U.S. naval deployments from Norfolk, Va.,’ Richard Fisher, military analyst with the International Assessment and Strategy Center, wore in an email. Fisher added that Russia is currently building new attack submarines to rival the U.S.’s Los Angeles-class vessels.

In recent months there’s been series of examples of Russia flexing its military strength near U.S. soil. Last summer saw the transit of two Bear-H strategic bombers near the Alaska air defense zone during Russian strategic bomber war games in arctic. Then in an likely Fourth of July political message, on Independence Day a Russian Bear-H flew the closest to the U.S. West Coast that a Russian strategic bomber had flown since the Cold War when such flights were routine. In both cases U.S. and Canadian interceptor jets met the Russian bombers. But U.S. officials dismissed both incidents as the Obama administration seeks to establish closer ties to Moscow. Russia bombers have also been detected near Norway’s airspace with a Bear H bomber spotted on Sept. 11 and 12 shadowed by NATO jet fighters. 55 Russian bombers have been detected near Norway’s territory in 2012, a sharp increase from the early 2000s. – Dailymail

The Romney Message: It’s no longer just the Economy, Stupid

The Romney Message: It’s no longer just the Economy, Stupid