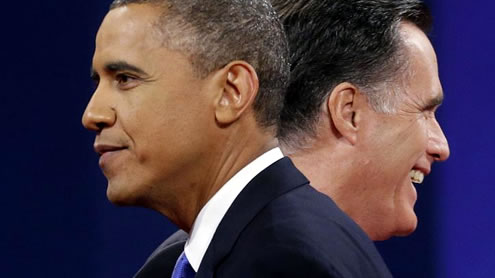 WASHINGTON: President Barack Obama and Republican challenger Mitt Romney were closed out their hard-fought and deeply negative battle for the White House on Monday, leaving Americans on the eve of Election Day with a stark choice between fundamentally opposing visions for the country.

After months of campaigning and billions of dollars spent in the battle for leadership of the world’s most powerful country, Obama and Romney were in a virtual nationwide tie, an overt symptom of the vast partisan divide separating Americans in the early years of the 21st century.

Obama appeared to have a slight edge, however, in the decisive swing states that saw a frenzy of last-minute attention from both candidates on Monday. Those states — nine in this election year that are not seen as reliably in either the Republican or Democratic camp — will be critical in deciding which man wins at least 270 electoral votes. Under the US system, the winner of the presidential election is not determined by the nationwide popular vote but in state-by-state contests. The candidate who wins a state — with Maine and Nebraska the exceptions — is awarded all of that state’s electoral votes, which are apportioned based on representation in Congress.

This year’s tight race raises the possibility of a replay of the chaotic 2000 election, when former President George W. Bush won the presidency with an electoral vote majority while Democrat Al Gore had a narrow lead in the nationwide popular vote. Obama and Romney, a former Massachusetts governor and the ultra-wealthy founder of a private equity firm, have spent months highlighting their sharp divisions over the role of government in Americans’ lives, in bringing down the stubbornly high unemployment rate, reducing the $1 trillion-plus government spending deficit and reducing a national debt that has crept above $16 trillion. The economy has proven a huge drag on Obama’s candidacy as he fought to turn it around after the near financial meltdown shortly before he took office and the deepest recession since the Great Depression of the 1930s, a downturn that was well under way when he replaced George W. Bush in the White House on Jan. 20, 2009.

The candidates’ opposing views on other issues from gay marriage to abortion rights have only added to the divisive atmosphere. “This is not just a choice between two candidates or two parties. It is a choice between two visions,” Obama told nearly 20,000 people in Wisconsin. “Our choice tomorrow is going to lead to very different outcomes,” Romney said at a rally in Virginia. If elected, Romney would be the first Mormon US president. Obama insists there is no way reduce the staggering debt and safeguard crucial social programs without asking the wealthy to pay their “fair share” in taxes. He hammered on Romney’s shifting positions and said the Republican’s proposals amount to the same “top-down policies that crashed our economy” in the first place. “It’s not about just about policies. It’s also about trust,” Obama said. “You know where I stand. You know what I believe. You know I tell the truth.”

Both men were most intent on Ohio, a Midwestern battleground state like Iowa and Wisconsin, where a majority of polls show Obama with a slim advantage. The mathematical possibilities, assuming a victory in those three states, give Obama a clear path to the 270 electoral votes needed for victory. In all there are 83 electoral votes spread across swing states Colorado, Florida, Ohio, New Hampshire, Virginia and Wisconsin. Romney appears to be performing slightly better than Obama or has pulled even in Virginia and Florida. No Republican has won the White House without carrying Ohio, an industrial state that has picked the winner of the last 12 presidential elections. Therefore, Ohio was the only state both candidates visited Monday, even as Romney’s campaign announced late in the day that he would return there on Election Day for a rally in the Cleveland area. The Republican also planned a Tuesday stop in the Pittsburgh, Pennsylvania, area before returning to his Boston home to wait out the returns. Romney has made a late-campaign drive for Pennsylvania, a state that had been seen as solidly in the Obama column. The move was widely seen as a push — perhaps against all odds — to compensate for Obama’s expected victory in Ohio.

Obama closes out his campaign in Iowa late Monday, returning to the state that first put him on the road toward the Democratic nomination with a 2008 victory in the lead-off caucuses over Hillary Rodham Clinton, now his secretary of state. He then flies to his Chicago home where he will spend Election Day and hold his post-election rally — win or lose. Both Obama and Romney say this year’s winner will be determined by which campaign gets the most supporters to the polls. The president needs the overwhelming support of blacks and Hispanics to counter Romney’s big lead among white men. At the same time, it has become evident that support among minorities — the euphoria of making history by electing America’s first black president — has cooled since the 2008 vote. Romney, who described himself as “severely conservative” during the Republican primary campaign, has shifted sharply in recent weeks to appeal to the political center, highlighting his claim to have been deeply bipartisan when he was governor of Democratic-leaning Massachusetts.

Still, he did not shy away from highlighting his differences with Obama, saying the president’s proposal to raise taxes on the highest earners would discourage hiring just when the country needs it most. Romney, who claims his successful business background gives him the expertise to manage the economy, favors lowering taxes and easing regulations on businesses. “The president thinks more government is the answer. More jobs is the answer, America,” Romney said in Virginia. Also at stake Tuesday is control of Congress, with all House seats and a third of Senate seats in play. Republican were expected to retain control of the House of Representatives,while Democrats were seen as narrowly defending their majority in the Senate, meaning that whoever wins the White House will likely have to contend with the same partisan legislative struggles that dogged Obama’s term. The final national NBC/Wall Street Journal Poll, released on Sunday, showed Obama with the support of 48 percent of likely voters, with Romney receiving 47 percent. The poll had a margin of error of 2.55 percentage points.

The final national poll from the Pew Research Center found Obama with a three-point edge over Romney, 48 percent to 45 percent among likely voters, an improved showing that indicates the president may have benefited from his handling of the response to last week’s Superstorm Sandy. Obama suspended three full days of campaigning to deal with the East Coast disaster. The Pew poll had a margin of error of 2.2 percentage points. The final Washington Post-ABC News tracking poll showed Obama with support from 50 percent of likely voters to 47 percent for Romney. – Arabnews