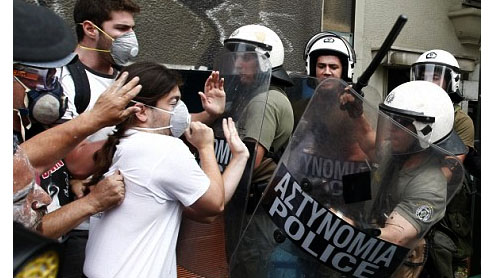 The British economy is set to power ahead of the rest of Europe, with some countries at serious risk of descending into social breakdown, according to a think-tank.

The Centre for Economics and Business Research predicted that UK output would shrink by 0.1 per cent this year, before rebounding in 2013 and 2014.Its forecasts suggest that even Europe’s strongest economies will be left behind by the resurgence, with growth of 0.8 per cent expected next year and 1.4 per cent in 2014.This would put Britain in first place among major European nations, including Germany, with expected growth of 1.2 per cent in 2014, and France on 0.2 per cent.

Italy and Spain are predicted to remain in recession throughout the two-year period, prompting the CEBR’s economists to warn that Europe is on the brink of civil unrest.‘The economic situation in some parts of Europe is moving from bad to catastrophic,’ said Douglas McWilliams, CEBR chief executive and co-author of the Global Prospects report.‘There is a danger that the economic problems will spill over into social breakdown in many areas of Europe as unemployment soars and governments run out of money.’

He cited anecdotal evidence of destitute people in Greece turning to desperate measures such as burglary and prostitution to make ends meet.We’re moving to a situation that hasn’t happened to a Western economy in peacetime,’ he said.He warned the upheaval witnessed in Greece could be replicated in other countries such as Italy, and austerity would ‘just make things worse’.The best thing for Europe’s struggling economies might be a break-up of the single currency, despite the initial pain it would cause, he said.

‘The only future for southern Europe is a low exchange rate,’ Mr McWilliams added, pointing out that this could not be achieved while the continent’s economic basket cases remain in the single currency.The British economy emerged from the double-dip recession in the third quarter of the year, with a boost from the London Olympics helping economic output up 1 per cent.By contrast, the CEBR expects the eurozone economy to shrink by 0.7 per cent this year and 0.4 per cent next year, before returning to ‘only  marginal’ growth of 0.4 per cent in 2014.

The report warns the global economy is on a knife edge, with the outlook at risk of  deteriorating rapidly in the event of political disruption in the Middle East, or a collapse in the eurozone.The assessment forced the CEBR to downgrade its worldwide forecast for economic output from 2.6 per cent this year to 2.4 per cent. Next year’s forecast was also cut, from 2.7 per cent to 2.5 per cent. – Dailytimes