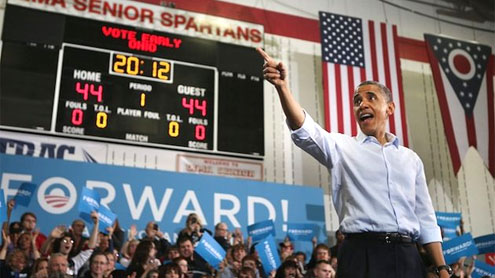 CINCINNATI : Win or lose Tuesday, the next two days will be the last President Barack Obama ever spends campaigning for public office, and he’s coming to terms with it.

“I’ve known him for 20 years. … I’ve never seen him more exhilarated than he is right now,” campaign strategist David Axelrod told a group of reporters after an event in Lima, Ohio, on Friday. “He feels very cognizant about the fact that this is his last campaign.”The president is entering the final round of a fight with Republican challenger Mitt Romney—one that, if the polls are accurate, could last until the early morning hours after Election Day, or longer. And whether he’s speaking to an intimate crowd of 2,500 in a gymnasium in rural Ohio or standing before 24,000 screaming supporters in a Virginia arena, his enthusiasm is clear.

At every rally in the past few days, Obama has followed a familiar outline in his speeches, bouncing between touting his own successes and casting doubt on Romney’s ability to lead.After beginning with words of encouragement for those struggling in the aftermath of Superstorm Sandy, Obama transitions to a rundown of important accomplishments, including the killing of Osama bin Laden, the recovery of the auto industry and the end of the war in Iraq.

He then pivots to the success of his last Democratic predecessor, Bill Clinton, and frames the election not merely as a choice between his record and Romney’s campaign promises, but one between the visions of former Presidents Clinton and George W. Bush. He credits Clinton’s higher tax rates for the economic growth during the 1990s and blames Bush’s cuts and deregulation for the crash of the late 2000s. Romney, he says, is “a gifted salesman” who will “repackage” Bush’s policies.

“We’ve tried our ideas and they worked,” Obama said Friday in Lima, Ohio. “We tried the other folks’ ideas—they don’t work.”The core of these speeches, however, is that Obama is “a champion,” in his words, for the working class and the downtrodden.”Kids dreaming of becoming scientists or doctors, engineers or entrepreneurs, diplomats, maybe a president—they need a champion,” Obama said Saturday in Milwaukee, Wis. “The future will never have lobbyists like the status quo does, but the dreams of those kids will be our saving grace.”

Obama also vows to refuse to compromise on specific principles in his second term and casts his opponent as a man who cannot be trusted.In addition, the president occasionally ad-libs, but while his off-the-cuff remarks are crowd-pleasers, they’re fairly predictable. Obama is known to stop midspeech, for instance, to tell supporters who say they love him that he loves them back. In Concord, N.H., on Sunday, a young volunteer who received no such reply despite many attempts looked toward the president and finally sighed. “Say I love you back,” she said quietly.

Behind the scenes, the president’s staffers exude a Zen-like appearance, seemingly having accepted that their hardest days in the years-long effort are finally behind them.After a rally in Tampa, Fla., last week for instance, White House spokesman Jay Carney started an impromptu dance party with some aides as music blared over the speakers. He was only interrupted when spotted by a supporter in the crowd who called him over to the rope line. With a kick still in his step, Carney hopped over to shake hands and take pictures.

But Axelrod also offered a serious assessment to back his team’s confidence, citing the slew of recent polls showing the president leading in battleground states.Our views are based on cold, hard data,” Axelrod said. “They’re not based on this kind of mystical faith that there’s this hidden vote that’s going to come roaring out on Election Day.”The campaign in Chicago released some of that data on Saturday, saying it has registered nearly 1.8 million voters since 2011 and had made more than 125 million voter contacts.

The Romney campaign, in contrast, says it has reached 50 million people through phone bank and door-knocking efforts.Obama campaign strategists say Tuesday’s election will be a close one, and they’re banking on that ground game to make the difference between victory and defeat.Call all of this what you will—justified confidence, foolish hubris or just the natural trappings of a national campaign—but Obama’s last days as a candidate are anything but frantic. – Yahoonews