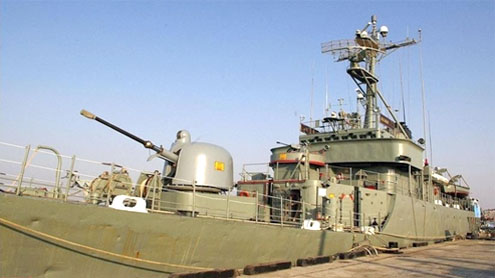 Two Iranian warships left a Sudanese port on Wednesday, AFP news agency reported, after a visit coinciding with Khartoum’s denial that Iran is involved in making weapons in Sudan.

A Sudanese military band played as Iran’s naval supply ship Kharg pulled away from the dock in Port Sudan on the Red Sea, the photographer said.Sudan’s links to Iran have come under scrutiny after Khartoum accused Israel of sending four radar-evading aircraft to strike the Yarmouk military factory in the heart of the capital Khartoum at midnight on October 23.The two Iranian navy vessels docked at a Sudan port on Monday, just five days after suspected Israeli planes bombed the arms factory, according to media reports.

The ‘Shahid Naqdi’ corvette and a freighter left from a port in southern Iran last month, passed through the Red Sea and docked at a port in Sudan, the Iranian official news agency IRNA reported.The Iranian ships arrived to “convey a message of peace and friendship to the region’s countries and to provide safety at sea in light of maritime terrorism,” IRNA reported.Two people were reported to have been killed after fire broke out last week at al-Yarmouk arms factory in southern Khartoum. Sudanese officials said that four military planes attacked al-Yarmouk plant and Israel was behind it.

Another report by Iran’s Press TV said that the Navy’s 22nd fleet was dispatched to the coasts of Djibouti and the Strait of Bab al-Mandeb in late September.The factory compound exploded and burst into flames, and speculation followed that Iranian weapons were stored or manufactured there.Sudan’s foreign ministry on Monday denied Iran had any involvement in the Yarmouk factory. It accused Israel of “spreading fabricated information.”Iranian sailors lined the Kharg’s deck and waved their hats in the air while their Sudanese counterparts watched from the jetty. – Alarabiya

Small Sudanese craft escorted the Kharg out of the harbour, after the departure of another Iranian warship, the corvette Admiral Naghdi. The Naghdi’s crew stood in orange life jackets as the gunboat departed.Iranian special forces armed with submachine guns were aboard.Iran’s Press TV reported earlier that the vessels arrived on Monday.They had been sent to the Djibouti area in September “to convey Iran’s message of peace to the regional countries and maintain the security of shipping corridors against maritime terrorism,” Press TV said.

On a visit to Tehran last August, Sudanese President Omar al-Bashir described the relationship between his country and Iran as “deeply rooted”.Sudan’s army spokesman Sawarmi Khaled Saad told the official SUNA news agency on Tuesday that the Iranian ship visit “will support strong political, security and diplomatic relations between the two states”.Saad said the port call was a chance for Sudanese naval personnel “to see advanced weapons and advanced ships.”“The docking of the Iranian ships in Port Sudan is not a secret,” Foreign Minister Ali Karti said, quoted by SUNA.

Israel refused all comment on Khartoum’s allegations about the factory blast.But a top Israeli defence official, Amos Gilad, said last week that Sudan “serves as a route for the transfer, via Egyptian territory, of Iranian weapons to Hamas and Islamic Jihad terrorists.”On Saturday, a U.S.-based non-profit monitoring group said craters at the scene of the explosion were consistent with the kind of damage created by the impact of air-delivered munitions.The Satellite Sentinel Project started by Hollywood star George Clooney said satellite imagery showed six large craters, each approximately 16 meters (52 feet) across, at the Yarmouk plant. – Alarabiya

Storm spins death and ‘a lot of tears’ along path

Storm spins death and 'a lot of tears' along path