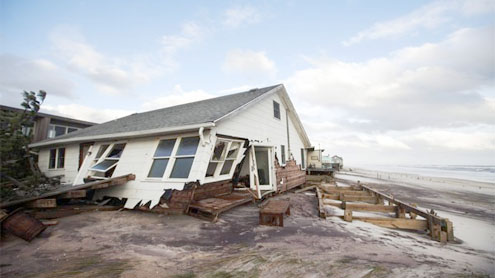 PITTSBURGH: The most devastating storm in decades to hit the country’s most densely populated region upended man and nature as it rolled back the clock on 21st-century lives, cutting off modern communication and leaving millions without power Tuesday as thousands who fled their water-menaced homes wondered when — if — life would return to normal.

A weakening Sandy, the hurricane turned fearsome superstorm, killed at least 50 people, many hit by falling trees, and still wasn’t finished. It inched inland across Pennsylvania, ready to bank toward western New York to dump more of its water and likely cause more havoc Tuesday night.  Behind it: a dazed, inundated New York City, a waterlogged Atlantic Coast and a moonscape of disarray and debris — from unmoored shore-town boardwalks to submerged mass-transit systems to delicate presidential politics.

“Nature,” said New York City Mayor Michael Bloomberg, assessing the damage to his city, “is an awful lot more powerful than we are.”More than 8.2 million households were without power in 17 states as far west as Michigan. Nearly 2 million of those were in New York, where large swaths of lower Manhattan lost electricity and entire streets ended up underwater — as did seven subway tunnels between Manhattan and Brooklyn at one point, the Metropolitan Transportation Authority said.

The New York Stock Exchange was closed for a second day from weather, the first time that has happened since a blizzard in 1888. The shutdown of mass transit crippled a city where more than 8.3 million bus, subway and local rail trips are taken each day, and 800,000 vehicles cross bridges run by the transit agency. – Yahoonews