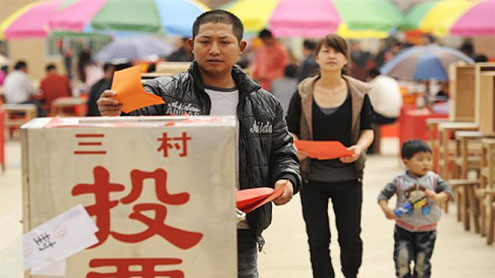 XIAOSHAN/WUKAN: Youjuan is an unlikely Chinese official. Free-spirited but driven, she left her village at age 17, got a degree in marketing, and opened a string of businesses in nearby cities in eastern China before settling in the coastal boomtown of Ningbo, 160 km (100 miles) from home.

She never looked back – until she got a phone call two years ago that set off a chain of events that would turn her into an anti-corruption campaigner, then the elected head of her village and, finally, into a disillusioned witness to the ruling Communist Party’s attempts at limited grassroots democracy. Her story, as she tells it, ends with a party unwilling to yield power and with her campaign losing momentum – a tale that reveals one of the most challenging riddles facing China’s incoming new leadership team: how can the party shore up its waning legitimacy without loosening its grip on power?

So far, an answer has been elusive.Critics say political reform stalled as the current leadership focused on delivering economic growth. Rumors have circulated ahead of the once-in-a-decade transition that leader-to-be Xi Jinping and his colleagues may be willing to push through much needed reforms – but it is far from clear.

Large-scale protests have increased in China, reflecting anger over corruption and the lack of government accountability and transparency – the kind of unrest that experiments in grassroots democracy, like the one Hua Youjuan participated in, were meant to help short-circuit.Instead, Hua said democracy in her home village of Huangshan, in eastern Zhejiang province, was never allowed to fully succeed, thwarted by senior party officials who she accused of resisting her campaign to root out corruption.

“If real reform comes, then I don’t mind staying where I came from, but if things continue like this I just don’t see hope,” she told Reuters.Hua’s frustrations are shared in other villages that have been to the ballot box, including China’s most famous testing ground for greater democracy, the southern fishing village of Wukan where a violent standoff over government land seizures led last year to the sacking of local leaders and elections.

On the first anniversary of the Wukan uprising in September, more than 100 villagers rallied outside Wukan’s party offices to protest against what they saw as slow progress by their newly elected village committee to return seized land. Some critics say the committee was outmaneuvered by higher party officials.China has experimented with limited democracy since the 1980s, holding nationwide village chief elections and giving people a voice in low-level government budgeting in some locales.

But China experts say most of these efforts have fizzled because of opposition from within the Communist Party, and that mass protests are still frequent. Some experts such as Sun Liping of Tsinghua University estimate there could have been 180,000 mass protests and riots in China in 2010.”Most people I know and meet know change is going to happen, but I don’t think anybody knows what kind of change and I don’t think anybody really knows how to initiate change,” said Tony Saich, a professor at Harvard’s Kennedy School of Government.

In October 2010, the ball ran out of control in Huangshan village, a suburban warren of houses and small factories on the south side of the city of Hangzhou.Convinced their local party boss was getting rich through corrupt means, residents launched a sit-in to block a construction project he was involved in.Hua, living in Ningbo, did not even know it was happening, but her father joined the movement, collecting donations from the village’s 6,000 residents to keep the protest going.

A friend of Hua’s with close ties to the local government called her and asked her to return to Huangshan to plead with her dad to quit. She did so in early November, but her father refused and the movement gained momentum.”He said, ‘Telling me to stop is worse than telling me to go and die at this point’,” she recounted.Police increased the pressure, summoning Hua and warning that her father could get into trouble if he did not stop.

That turned out to be the wrong tack with the 36-year-old who has a soft smile but a hard head.She demanded to know what law his actions violated, and then left uncowed. She then became part of the villagers’ movement, suggesting they step up their protest by trying to impeach the party chief from his role as head of the village economic cooperative. They began collecting signatures.On November 10 officials from the district that oversees Huangshan village came to negotiate, but the villagers blocked their exit for several hours. Police were called to get them out, Hua said. – TOI