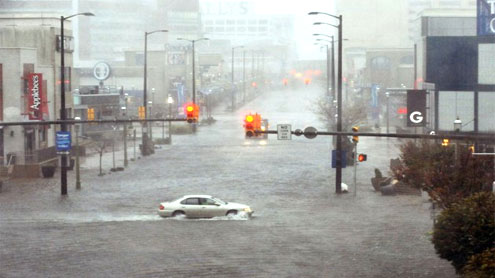 At least four deaths were blamed on the storm, and the presidential campaign ground to a halt a week before Election Day.Sandy knocked out power to at least 3.1 million people, and New York’s main utility said large sections of Manhattan had been plunged into darkness by the storm. Water pressed into the island from three sides.Just before its centre reached land, the storm was stripped of hurricane status, but the distinction was purely technical, based on its shape and internal temperature. It still packed hurricane-force wind, and forecasters were careful to say it remained every bit as dangerous to the 50 million people in its path.

As the storm closed in, it smacked the boarded-up big cities of the Northeast corridor — Washington, Baltimore, Philadelphia, New York and Boston — with stinging rain and gusts of more than 85 mph. It also converged with a cold-weather system that turned it into a superstorm, a monstrous hybrid consisting not only of rain and high wind but snow.Sandy made landfall at 8 p.m. near Atlantic City, which was already mostly under water and saw a piece of its world-famous Boardwalk washed away earlier in the day.

Authorities reported a record surge more than 13 feet high at the Battery at the southern tip of Manhattan, from the storm and high tide combined.In an attempt to lessen damage from saltwater to the subway system and the underground electrical network that underlies the city’s financial district, New York City’s main utility cut power to about 6,500 customers in lower Manhattan. But a far wider swath was hit with blackouts caused by flooding and transformer explosions.The subway system was shut down Sunday night, and the stock markets never opened at all Monday. They are likely to be closed Tuesday as well.

Airlines cancelled more than 12,000 flights, disrupting the plans of travelers all over the world, and storm damage was projected at $10 billion to $20 billion, meaning it could prove to be one of the costliest natural disasters in U.S. history.The four deaths were in Maryland, Pennsylvania, Connecticut and New York. Among them were two people killed by falling trees.

President Barack Obama and Republican challenger Mitt Romney cancelled their campaign appearances at the very height of the race, with just over a week to go before Election Day. The president pledged the government’s help and made a direct plea from the White House to those in the storm’s path.

“When they tell you to evacuate, you need to evacuate,” he said. “Don’t delay, don’t pause, don’t question the instructions that are being given, because this is a powerful storm.”Sandy, which killed 69 people in the Caribbean before making its way up the Atlantic, began to hook left at midday toward the New Jersey coast.

The storm lost its status as hurricane because it no longer had a warm core centre nor the convection — the upward air movement in the eye — that traditional hurricanes have, but it was still as dangerous as it was when it was considered a hurricane, according to National Hurricane Center spokesman Dennis Feltgen.Pete Wilson, who owns an antiques shop in Cape May, N.J., at the state’s southern tip and directly in Sandy’s path, said the water was 6 inches above the bottom edge of the door. He had already taken a truckload of antiques out but was certain he would take a big hit.

“My jewelry cases are going to be toast,” he said. “I am not too happy. I am just going to have to wait, and hopefully clean up.”New Jersey Gov. Chris Christie said people were stranded in Atlantic City, which sits on a barrier island. He accused the mayor of allowing them to stay there. With the hurricane roaring through, Christie warned it was no longer safe for rescuers, and advised people who didn’t evacuate the barrier islands to “hunker down” until morning.

“I hope, I pray, that there won’t be any loss of life because of it,” he said.While the hurricane’s 90 mph winds registered as only a Category 1 on a scale of five, it packed “astoundingly low” barometric pressure, giving it terrific energy to push water inland, said Kerry Emanuel, a professor of meteorology at MIT. And the New York metropolitan apparently got the worst of it, because it was situated on the dangerous northeastern wall of the storm.

“We are looking at the highest storm surges ever recorded” in the Northeast, said Jeff Masters, meteorology director for Weather Underground, a private forecasting service. “The energy of the storm surge is off the charts, basically.”Hours before landfall, there was graphic evidence of the storm’s power.A construction crane atop a luxury high-rise in New York City collapsed in the wind and dangled precariously 74 floors above the street. Forecasters said the wind at the top the building may have been close to 95 mph.

Off North Carolina, a replica of the 18th-century sailing ship HMS Bounty that was built for the 1962 Marlon Brando movie “Mutiny on the Bounty” went down in the storm, and 14 crew members were rescued by helicopter from rubber lifeboats bobbing in 18-foot seas. Another crew member was found hours later but was unresponsive. The captain was missing.At Cape May, water sloshed over the seawall, and it punched through dunes in other seaside communities. Sandy also tore away an old section of Atlantic City’s historic boardwalk.

“When I think about how much water is already in the streets, and how much more is going to come with high tide tonight, this is going to be devastating,” said Bob McDevitt, president of the main Atlantic City casino workers union. “I think this is going to be a really bad situation tonight.”In Maryland, at least 100 feet of a fishing pier at the beach resort of Ocean City was destroyed, and Gov. Martin O’Malley said there would be devastating flooding from the swollen Chesapeake Bay.

“There will be people who die and are killed in this storm,” he said.At least half a million people had been ordered to evacuate, including 375,000 from low-lying parts of New York City, and by the afternoon authorities were warning that it could be too late for people who had not left already.Sheila Gladden evacuated her home in Philadelphia’s flood-prone Eastwick neighbourhood, which took on 5 1/2 feet of water during Hurricane Floyd in 1999, and headed for a hotel.

“I’m not going through this again,” she said.Those who stayed behind had few ways to get out. Not only was the subway shut down, but the Holland Tunnel connecting New York to New Jersey was closed, as was a tunnel between Brooklyn and Manhattan, and the city planned to shut down the Brooklyn Bridge, the George Washington, the Verrazano-Narrows and several other spans because of high winds.If the storm reaches the higher estimate of $20 billion in damage, that would put it ahead of Hurricane Irene, which raked the Northeast in August 2011 and caused $16 billion in damage. Hurricane Katrina, which killed 1,200 people, cost $108 billion.