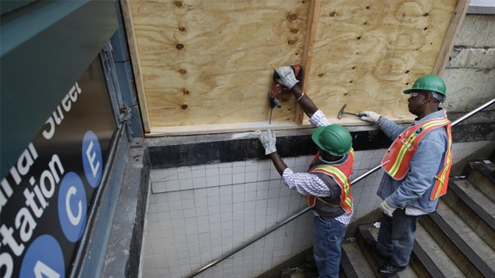 SHIP BOTTOM, N.J. (AP) — Forget distinctions like tropical storm or hurricane. Don’t get fixated on a particular track. Wherever it hits, the rare behemoth storm inexorably gathering in the eastern U.S. will afflict a third of the country with sheets of rain, high winds and heavy snow, say officials who warned millions in coastal areas to get out of the way.

“We’re looking at impact of greater than 50 to 60 million people,” said Louis Uccellini, head of environmental prediction for the National Oceanic and Atmospheric Administration.

As Hurricane Sandy barreled north from the Caribbean — where it left nearly five dozen dead — to meet two other powerful winter storms, experts said it didn’t matter how strong the storm was when it hit land: The rare hybrid storm that follows will cause havoc over 800 miles from the East Coast to the Great Lakes.

“This is not a coastal threat alone,” said Craig Fugate, director of the Federal Emergency Management Agency. “This is a very large area.”

President Barack Obama was monitoring the storm and working with state and locals governments to make sure they get the resources needed to prepare, administration officials said – YahooNews