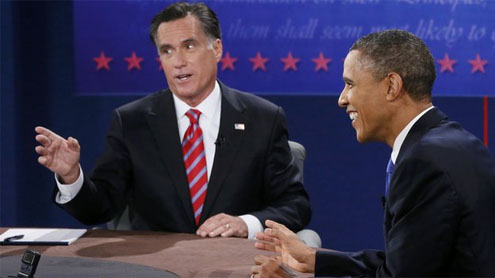 President Barack Obama and his Republican challenger Mitt Romney are beginning a two-week drive to US election day following their third and final televised debate.

Both candidates will criss-cross the country this week, speaking at election rallies and increasing spending on advertising in key states.Monday’s tense meeting in Florida saw the rivals tangle over foreign policy.With two weeks to go until election day the race is now neck and neck.President Obama forcefully attacked Mr Romney as “all over the map” on foreign policy. Mr Romney countered by saying the president had allowed “chaos” to engulf the Middle East.

Snap polls of viewers by US TV networks CBS and CNN suggested Mr Obama won the debate.
Both men are campaigning in key electoral battleground states – on Tuesday Mr Obama appeared in Florida and then Ohio, while Mr Romney headed for Nevada and Colorado.The president will travel to six more battleground states.But of all the states that could swing the election, Ohio is widely held to be the jewel in the crown.

Mr Obama has campaigned there more aggressively than anywhere else. Ohio’s unemployment rate is 7% – below the national average of 7.8% – although surveys in the state show the president has only the narrowest of leads.Mr Romney plans a flurry of pre-election campaign appearances in the Buckeye state, hoping to eke out a breakthrough.Mr Obama attacked his rival in a speech to supporters in Dayton, Ohio. “In the closing weeks of the campaign, he’s doing everything he can to hide his true positions,” said the president of his Republican challenger.

“He is terrific at making presentations about stuff he thinks is wrong with America, but he sure can’t give you an answer about what will make it right. And that’s not leadership you can trust.”Meanwhile, the former Massachusetts governor visited Nevada and Colorado for rallies with running mate Paul Ryan on Tuesday.In an appearance in Henderson, Nevada, Mr Romney told a large crowd of cheering supporters that Mr Obama was a “status quo candidate”.”That’s why his campaign is slipping and ours is gaining so much steam,” Mr Romney added.Mr Ryan, a Wisconsin congressman, is scheduled to deliver a speech on Wednesday outlining how the Republican ticket would help the middle class in Ohio.

Mr Obama’s campaign on Tuesday released 3.5 million copies of a 20-page booklet – Blueprint for America’s Future – to promote his second-term agenda, amid criticism that the president has not set out a plan for the next four years.It outlines Mr Obama’s plan to improve education, increase manufacturing jobs, enhance US-derived energy supplies, reduce the federal deficit and impose taxes on the wealthy.Mr Romney’s campaign has produced a new TV ad using footage from the final debate of the Republican accusing Mr Obama of going on an “apology tour” of Middle East nations while never visiting Israel as president.

Analysts have said the campaigns and groups that support them have spent or reserved $950m (£600m) on TV adverts – most of which has aimed negative attacks at the opposing candidate.Material collected suggested that Mr Romney and Republican groups had spent about $100m more than the Democrats, the Associated Press reported.Both sides are working to win early votes. About five million people have already voted, and 35 million people are expected to cast ballots before polling day on 6 November. – BBC