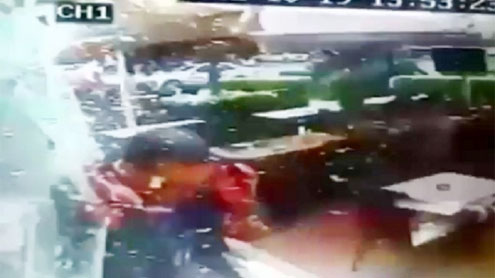 Footage shows the glass door of the restaurant shattering due to the explosion. A man standing nearby was showered with broken glass and fell to the ground as customers rushed to escape.The video also shows the date and time of the explosion on Friday Oct. 19, 2012 at 13:53:23 Beirut time.

In the attack, Wissam Al-Hassan, brigadier general at Lebanese International Security forces (ISF) and head of the police’s Information Branch was assassinated.Rubble and the twisted, burning wreckage of several cars filled the central Beirut street where the bomb exploded, ripping the facades and balconies off buildings.

Firefighters scrambled through the debris and rescue workers carried off the bloodied victims on stretchers. In the confusion following the blast, it took several hours before any official word emerged that Hassan had been targeted.Hassan, 47, was known for his opposition to the Syrian regime and was linked to the intelligence chief’s recent case, in which he exposed an alleged plot by Syria to sow chaos in Lebanon. – Alarabiya