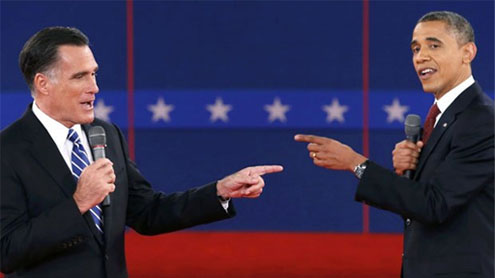 The final U.S. presidential debate will be held in the early hours of Tuesday and will focus on a topic which will impact the next four years of the relationship between the Middle East and the United States, as foreign policy will be the focus of the debate.

The debate will determine the final decision of U.S. voters who are still indecisive about who to vote for.In the final debate, held at Lynn University in Florida, both President Barack Obama and Governor Mitt Romney will enter the debate ring for their final clash with questions regarding the U.S. foreign policy and what each one’s views and stands are on the rising international issues.

Romney is expected to launch direct criticism against Obama over several Middle East-related issues, including the recent assassination of Lebanese intelligence officer Wissam al-Hassan, the ongoing civil war in Syria, and the possible indicators regarding the future nuclear program between the U.S. and Iran.

(I think the main argument would be the failure of the Obama administration to prevent the assassination of the US envoy in Benghazi Libya).Prior to the first presidential debate, Obama carried a 15-point lead over his opponent, but that lead transformed into a tied match as the last debate is just hours away.

The Obama administration will continue to work with Iraq, after pulling out all the U.S. troops out of the country, to promote the highest measures of security and prosperity.After the fall of Muammar Qaddafi’s regime and the rising violence in the country, Obama promised to support the new Libya to establish a well-built democracy.He promised to ensure all nuclear weapon is kept away from the hands of terrorists and to keep other countries from possibly obtaining any nuclear weapons.

According to Romney, his administration will support individuals in Egypt, Tunisia, and Libya to make the transition to a democracy and build sturdy democratic institutions to help people who have been closed for too long to experience open societies.Focusing on Syria, the Romney administration will hold a three-part strategy to ensure the removal of the Syrian regime.

First, Romney will undermine the regime’s grip on power by adding sanctions which will directly target the regime.Second, Romney will work to prevent any export of weapons.Third, there will be close ties with the Syrian opposition to ensure a smooth transition to a post-Assad government.Romney will establish a strong partnership with Iraq, away from sacrificing any U.S. military troops to establish a strong and safe Baghdad. – Alarabiya