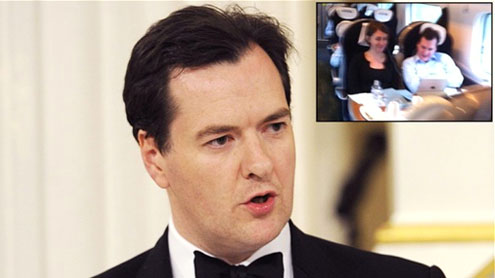 George Osborne caught in first class with a standard ticket

George Osborne, who was last week forced to pay a £160 rail upgrade after sitting in first class with only a standard ticket, had already been caught making the same “error” five months ago, it has emerged.

The Chancellor, whose aide allegedly attempted to convince the ticket inspector to allow him to remain in the exclusive seats, had also sat in first class holding only a standard rail ticket in May, it has been claimed.A witness told a Sunday newspaper Mr Osborne was then confronted by a member of staff on the train and asked to present his ticket.When he failed to produce a first class ticket, the “embarrassed” inspector told him he must pay for an upgrade or move into standard class with other passengers, it is said.

According to a fellow passenger, the Chancellor then went to “slum it” with ordinary voters in standard class for the remainder of the journey, from London to his constituency in Tatton, Cheshire.A commuter who was on the train in May told the Sunday Mirror: “Mr Osborne was confronted in first class by an inspector. The official seemed a bit embarrassed by the whole thing but quite correctly he treated Mr Osborne like anyone else. “After a short discussion Mr Osborne gathered up his things and moved to a different carriage and slummed it with everyone else.

“I was a bit shocked to see the Chancellor trying to blag a cheap seat. I’d have thought with the money he has that he could afford the ticket.”The witness came forward after Mr Osborne was reported to have reluctantly paid a £160 train ticket upgrade after sitting in first class with only a standard ticket on Friday.The Chancellor boarded the train to Euston at Wilmslow, Cheshire in the afternoon, before settling into first class with his special adviser.

He was then challenged by a ticket collector who refused to allow the Chancellor to remain in his premium-priced seat – unless he paid the extra.His special adviser reportedly said Mr Osborne, the third most senior minister in the Government, could not possibly remove himself to sit among the general public in standard class for the two hour journey to London.The embarrassing gaffe, described as a “stand-off”, was observed by ITV reporter Rachel Townsend who tweeted the exchange between the Tory MP and the ticket collector.Ms Townsend tweeted: “Very interesting train journey to Euston Chancellor George Osborne just got on at Wilmslow with a STANDARD ticket and he has sat in FIRST CLASS.”

She told ITV: “George Osborne got on the train with aides at Wilmslow and went straight to first class.“Then his aide approached the ticket collector right next to me. He said he is travelling with George and he has a standard ticket but can he remain in first class?“The guard said no. The aide said Osborne couldn’t possibly sit in standard class. The guard replied saying if he wants to stay it’s £160.“The aide said he couldn’t pay and he couldn’t really sit in standard. The guard refused to budge.“The guard went on gathering tickets and later told me Osborne had agreed to cough up the £160.”

The incident happened on a Virgin Trains service on the West Coast Mainline – the route franchise controversially awarded to FirstGroup before the decision was scrapped over “technical flaws” in the bid process.A spokesman for the Chancellor said he had no idea of the discussion with the guard about paying for the upgrade, and denied that he had refused to pay for an upgrade.He said: “The Chancellor got a different train than planned due to diary change following a series of meetings in his constituency.

“As he had no seat reservation on the new train which was crowded, he decided to upgrade – and obviously intended and was happy to pay.”A spokesman for Virgin Trains said that Mr Osborne paid £189.50 to upgrade the tickets for himself and one of his aides.He said: “The situation was dealt with amicably between the Train Manager and George Osborne’s aide.”At no time was there a disagreement or a refusal to pay for the upgrade. Nor was there any discussion between the Train Manager and Mr Osborne.” – Telegraph