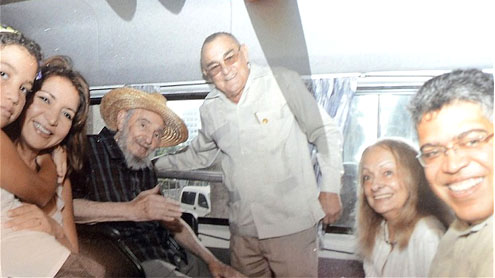 Cuban revolutionary leader Fidel Castro has appeared in public for the first time in months, refuting persistent rumours that he was gravely ill.

Staff at a top hotel in the capital, Havana, said Mr Castro had dropped off a Venezuelan politician on Saturday.Venezuelan ex-Vice-President Elias Jaua confirmed he had had a five-hour meeting with Mr Castro, who is 86.Speculation about Mr Castro’s health has been constant since his brother Raul took over the presidency in 2006.Mr Jaua told journalists gathered at the Hotel Nacional in Havana that Fidel Castro was “very well, very lucid”.

The Venezuelan politician, who served as vice-president until elections earlier this month, also showed a photograph of the encounter.The last images of Mr Castro to be made public had been from March, when the Cuban ex-leader briefly met Pope Benedict during the pontiff’s visit to the Communist island.Mr Castro’s long absence from the public stage had fuelled rumours on social media sites that his health had deteriorated, or that he may even have died.

But Mr Jaua said the Cuban ex-leader was on good form.”We talked for five hours about agriculture, history, international politics and, well, Fidel is doing fine,” he said.Mr Jaua said Mr Castro accompanied him to the Hotel Nacional after the meeting: “He had the courtesy of bringing me to the hotel.”Hotel Director Antonio Martinez said he had found Mr Castro “very happy, constantly smiling and talking about a lot of things”.

However, Mr Castro did not personally cast his vote in the local elections which were held in Cuba on Sunday. Instead, he filled in his ballot paper at home, and it was delivered to a polling station on his behalf.Fidel Castro led Cuba after the revolution in 1959, first as prime minister (1959-1976) and later as president.In 2006, surgery took Fidel Castro out of public view. His brother Raul became acting president.In February 2008, Fidel Castro officially handed over power to Raul who has been leading the country since then. – BBC

Newsnight boss steps down over damning evidence of Savile ‘cover-up’

Newsnight boss steps down over damning evidence of Savile 'cover-up'